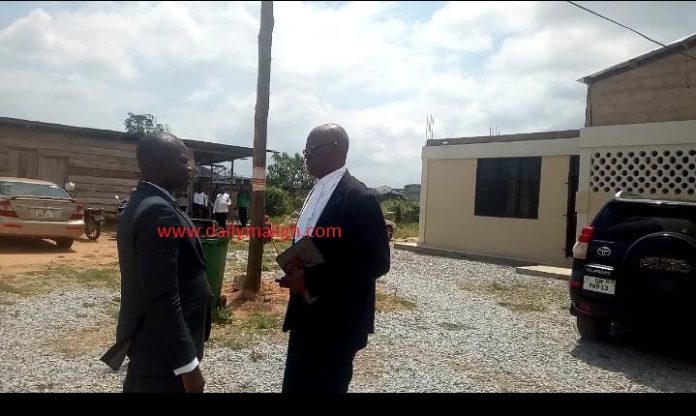 Lawyer for the suspect involved in the murder of Otumfuo’s sub-chief is claiming that he is being followed by some unknown persons.

Lawyer John Ndebugri has, therefore, reported to the local branch of the Ghana Bar Association in Bolgatanga, for further action.

His client, 38-year-old Anwar Sadat Mohammed, is standing trial for his alleged involvement in the murder of the Asamponghene, Nana Kwadwo Afodour.

Though Lawyer Ndebugri is yet to report the matter to the police, he however maintains, such threats will not deter him from representing his client in court.

“Since I was instructed to represent the accused person in this case, I have had some indirect threats…When a lawyer is being enrolled he swears an oath to defend his clients without fear or favour… So where I have been instructed to represent an accused person and I am threatened and I withdraw from the case then I am in breach of that oath”, the visibly worried top Ghanaian Lawyer told DailymailGH on Thursday, adding that “if it is the will of God that I die through this case, I prefer that done than dying through Malaria”.

Meanwhile, the suspect has since been remanded into prison custody by the Asokore Mampong District Court.

Prosecution told the court presided over by Her Worship Portia Molly Anafo Salia (Mrs) that it needs more time to conclude investigations.

Prosecution also indicated to the court that it is yet to submit a completed docket to the office of the Attorney General for further advise.

Lawyers for the accused person also prayed the court to order prosecution to make full disclosure of copies of charge sheets and other documents be made available to their client.

The prayer was subsequently granted.

It would be recalled that the Asamponghene, who rendered key services to the Asantehene, Otumfuo Osei Tutu II, was found dead in his car at a spot between Ejura and Nkoranza two months ago.

The police, after visiting the crime scene and picking key information, concluded that the traditional leader was murdered.

Sadat, who was said to be a close friend of the late chief, suddenly disappeared from his house at Odeneho Kwadaso, and was immediately declared wanted.

After painstaking investigations, the police, with the help of Interpol, arrested him several weeks later in Burkina Faso.

More than 150 Ghanaian migrants back from Libya