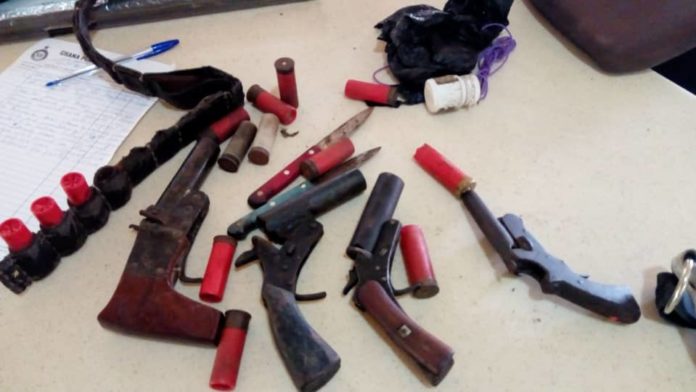 Six persons are being investigated in connection with an alleged attempt to illegally import arms and ammunition into the country from Turkey, the Marine Police Unit in Ghana’s port city of Tema has said.

The 436 pistols and 26 packs of ammunition consisting of 50 pieces each in a pack were found to have been concealed in personal effects made up of clothing, shoes, and bags among other items in a 20-footer container with a declaration number 40920230853.

An agent with Crystal Shipping who had attempted clearing the consignment at the Tema Port on Friday, October 9, 2020 led the police to arrest five others said to be owners of the various parcels that were consolidated into the container.

Sources at the Port told Graphic Online that the arms were detected during a physical examination exercise on the container at the Terminal Three facility by officials of the Tema Command of Customs who then informed the Marine Police Unit and other security agencies at the port.

The Commander of the Marine Police Unit, Mr. Joseph Antwi-Ababio confirmed the incident to Graphic Online but said, further investigations were being carried out to ascertain the purpose for the importation.

The Commissioner-General of the Ghana Revenue Authority (GRA), Mr. Ammishadai Owusu-Amoah who also corroborated the arrest said the guns and the ammunition were being kept at the armory of GRA to allow for investigations.

He said that the six people in custody were identified as the owners of some of the parcels in the container.

“For now, I can’t say whether the importers had the necessary licenses permitting them to undertake the importation of the arms since our officers at the port did not find any documentation covering the gun imports,” Mr. Owusu-Amoah said.

He added that the importers and agent for the items also failed to list the pistols and ammunition on the import declaration form that had the other items listed on it.

Bank of Ghana shuts down Ideal Finance, GN Savings, 21 other...

Digitization will eliminate corruption in the courts – Ghana’s Chief Justice

Ghana’s Free SHS is free. No need for parents to support...