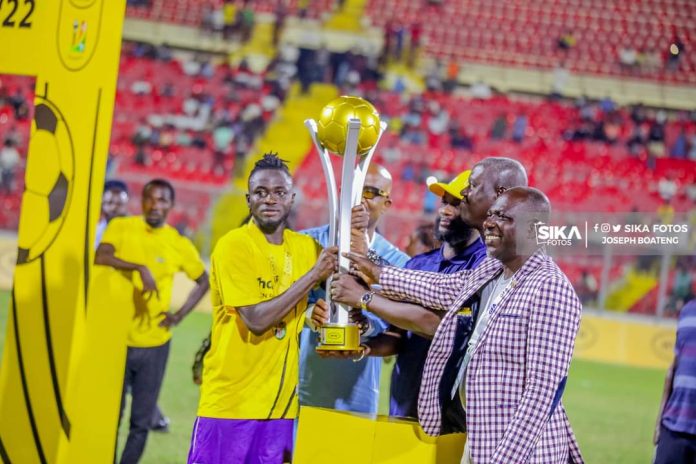 The German top-flight recently visited the Phobians in Ghana to inspect the club’s facilities as part of their partnership.

The German club took to Twitter on Monday morning to congratulates the Ghanaian club who won their second FA Cup trophy in two seasons.

“What an achievement 🏆 Congratulations to @HeartsOfOakGH!Enjoy and celebrate this great success”, they Tweeted.

Bechem United FC succumbed to Accra Hearts of Oak SC in the 2021-22 MTN FA Cup final on Sunday evening to retain the trophy.

The Hunters fell flat under the Oak Tree at the Baba Yara Sports Stadium in Kumasi to win back-to-back MTN FA CUP trophy under coach Samuel Boadu in his one and half year stay at the club.

Hearts started the game very strongly but faded out after just 10 minutes of the frenetic encounter.

Bechem United dominated the next 20 minutes of the match and pushed the Phobians back into their own half with scintillating display.

The Hunters had the better chances and came close to scoring with a lot good chances but failed to capitalize on their earlier opportunities.

Hearts also came into the game and had their chances but Daniel Afriyie Barnieh and Benjamin Yorke fluffed their lines.

Halfway through the first half of the match, Bechem United FC finally broke the deadlock as they capitalized on Yorke’s mistake before Emmanuel Avornyo tapped in from Augustine Okrah’s rebound to make it 1-0.

Just before the break, Samuel Inkoom, a former Kumasi Asante Kotoko SC defender sent in a wonderful cross from the right side of attack into the path of of Caleb Amankwah who’s bicycle kick found the left corner to make it 1-1.

Thirteen minutes into the second half of the match, Hearts played a quick and beautiful passes on the left side of attack and Gladson Awako, the Man-Of-The-Match sent in a delicious cross which was swiftly, excellently and intelligently converted by birthday boy Afriyie Barnieh to turn it around and put Hearts in the lead.

Hearts controlled the game and played better than their opponents in the second half and were the better team in the second 45 minutes of the match.

Experienced and star player of Bechem United FC, Augustine Okrah was sent off after headbutting the assisting referee for a throw he awarded against the Hunters which the player didn’t agree with ref and was sent to take an early shower.

Hearts held on and created decent chances which couldn’t be converted by Afriyie Barnieh – and Bechem United nearly grabbed the equalizer late in the game.

Hearts held on and won the trophy for the second consecutive time and will represent Ghana in the 2022-23 CAF Confederation Cup after the win.