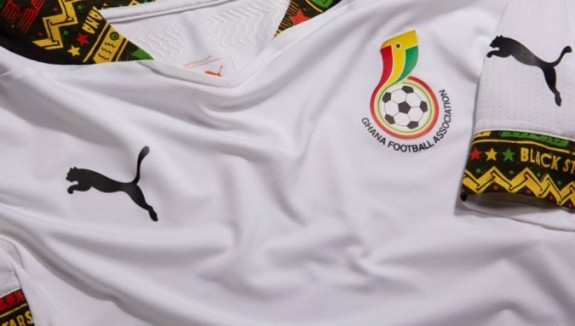 Going into the 2006 FIFA World Cup, German sportswear manufacturer PUMA looked in great shape, with a dozen teams — three times the number at the previous edition in Japan/Korea — bearing the image of its famous leaping cat.

Germany 2006 did prove a good tournament for PUMA as, for the first time, it produced a world champion. But the victorious Italians weren’t PUMA’s sole pride at the finals; also receiving great applause was Ghana, one of only two other PUMA-sponsored teams to progress past the group stage. Ghana made it no farther than the Round of 16, but their four-game run was as memorable as any ever seen of a debutant. Stunning highly-ranked USA and Czech Republic, the Black Stars suffered no shame in losses to eventual champions Italy, and Brazil, from whom Gli Azzurri took the trophy.

Ghana would return to the global stage four years later, again in PUMA gear, taking in five matches this time as only Africa’s third-ever World Cup quarter-finalists. When the Stars made a third appearance in 2014 — their finest hour yet, we hoped — PUMA fitted them out in, perhaps, their best offering yet, based on a motif of traditional Ghanaian cloth. Given how that trip turned out, however, Ghana were probably overdressed.

The Stars failed to win a game in tricky Group G, but the overall performance wasn’t half as bad as the off-pitch behavior. Brazil is recognized as the pioneer of the telenovela genre, but Ghana’s drama at that Mundial — the separate incidents of indiscipline that led to the dismissal of two players, the entire playing body’s mutiny over unpaid fees and the subsequent airlifting of cash by government to meet those demands — easily ranks as one of the most incredible storylines to have developed on the South American country’s soil.

For Ghana, it marked the beginning of a difficult period — also the end of a so-called golden era. A finalists’ finish at the following year’s Africa Cup of Nations suggested Ghana had broken their fall, but the decline resumed and continued steadily until summer of 2019 when the Stars failed to reach the semis of an AFCON for the first time in seven editions; a year prior, a corruption exposé had forced a hard reset on Ghana’s football system and stained its brand.

Fast-forward to May 2020, and PUMA has reviewed downwards the terms of its contract with the Ghana Football Association by 30%, with officials of the current FA attributing that reduction mainly to ‘Number 12’, the aforementioned scandal.

“The figures have changed a little because of the exposé, because of sales, because of popularity, but [the new FA administration] have been there to speak to them and we will see how we can come back to that level [we used to be],” explained Nana Oduro Sarfo, an Executive Council member, to Joy Sports.

Others claim, however, that the PUMA move has more — everything, really — to do with Ghana’s failure to reach the 2018 FIFA World Cup.

“Just as we have clauses for performance-related bonuses which appreciates when the senior team progresses in tournaments, failure to qualify for a major tournament like the FIFA World Cup is also a major determining factor when we are renegotiating team sport contracts,” Ghanaian journalist Amin Lamptey quotes a ‘PUMA source’.

If those reports — echoed by Wilfred Osei Palmer, a high-ranking member of the erstwhile FA regime — are as valid as they sound, Ghana shouldn’t be settling for the not-so-favorable cards being dealt by PUMA. The Stars’ stock has dropped considerably in recent years, yes, but PUMA hasn’t fared much better on the international scene. Its representation at the World Cup fell a little in 2010 and 2014, though remaining higher than the pre-2006 figures.

But the depths reached at Russia 2018, where PUMA had just four sides on its roster, was an all-time low in the competition’s 32-team format only matched by 2002’s paltry tally. Of the 17 national teams PUMA kits, only four were ranked among FIFA’s top 20 — just one in the top 10 — at the last reckoning. Market leaders Nike and Adidas, in comparison, boast eight and seven, respectively.

Speaking of which . . . just what are Ghana’s national teams still doing in PUMA’s shirts, charley?

They’ve lost their novelty and don’t quite elicit the same overwhelming thrill in Ghanaian hearts they once did, especially when viewed in the light of the headline-grabbing designs regional rivals Nigeria have been getting from Nike. Don’t blame us for staring so longingly at the Nigerian wardrobe; a 15-year romance isn’t very easy to sustain. Things need to be spiced up, and PUMA simply doesn’t wield the brush boldly enough these days — certainly not as boldly as we would want them to, or as the likes of Adidas and Nike do.

Tired of PUMA, too?