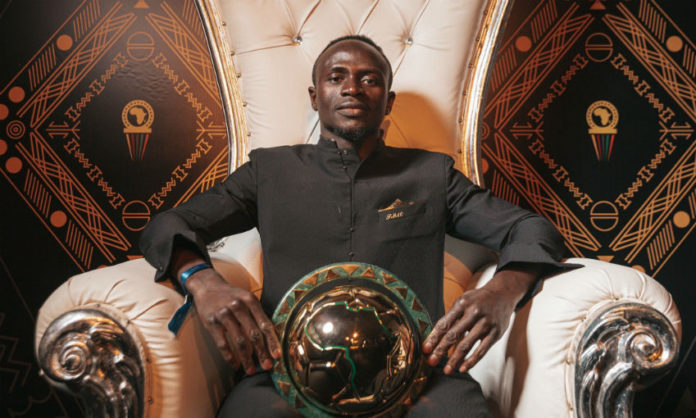 On a night when Riyad Mahrez helped Manchester City dispatch rivals Manchester United in the League Cup semi-final, and Mohamed Salah had an easier time elsewhere in England’s North-West, Sadio Mane finally got crowned by the Confederation of African Football (CAF) as the continent’s best player.

For three years in a row, Mane — as runner-up — had the privilege of witnessing CAF’s coronations up-close, but never his own: first Mahrez’s, then two of club teammate Salah’s. Last year’s event, held in Senegal — Mane’s homeland — must have hurt most. Despite looking the part of a good host and celebrating with Salah on stage, Mane couldn’t have felt too glad.

It wasn’t a favor the Egyptian returned on Tuesday evening when the awards ceremony was carried over to his country, with Salah choosing to skip the gala for debatable reasons. Mahrez, with the aforementioned excuse, was also absent. But the lack of bridesmaids didn’t ruin Mane’s procession. Lights — in the form of stellar performances for Liverpool and silverware in the year under review — have illuminated his path to these heights, and nobody was raining on his parade; not Mahrez with his goal against United, and definitely not Salah doing much less on Merseyside.

If eyebrows (including that of winner Lionel Messi) were raised over why Mane didn’t finish higher than fourth in December’s Ballon d’Or rankings, there were none here — only unanimous nods of approval. Mane’s last visit to Egypt was not so memorable, marred by a 2019 Nations Cup final loss to Mahrez-led Algeria in Cairo.

This time, though, Egypt — in the coastal city of Hurghada, some 400 kilometers from Cairo — had only fond memories to offer, with Mane becoming the first Senegalese to win the award since the second of boyhood hero El Hadji Diouf’s prizes in 2002. He also joins Diouf — and, of course, Salah — as the only players to win the award while on Liverpool’s books, and the Premier League leaders now overtake Olympique Marseille and Manchester City as the club with the most winners on record.

Mane returns to Liverpool, proud and inspired to resume his role as the Reds’ defining force in this season’s remarkable push for top-flight glory. Even in a team that has no shortage of match-winning individuals — including, but not limited to, the world’s best goalkeeper, center-half, full-backs, and classy forwards like Salah and Roberto Firmino — Mane still catches the eye as he did with the fine black outfit picked out for yesterday’s moment of honor.

There is, you’d feel, a real likelihood that — should Liverpool’s Premier League title tilt climax as hoped, especially — Mane would be back here soon, with or without company on the podium.

THE DEBATE: Is Akonnor Ready For Ghana Job?