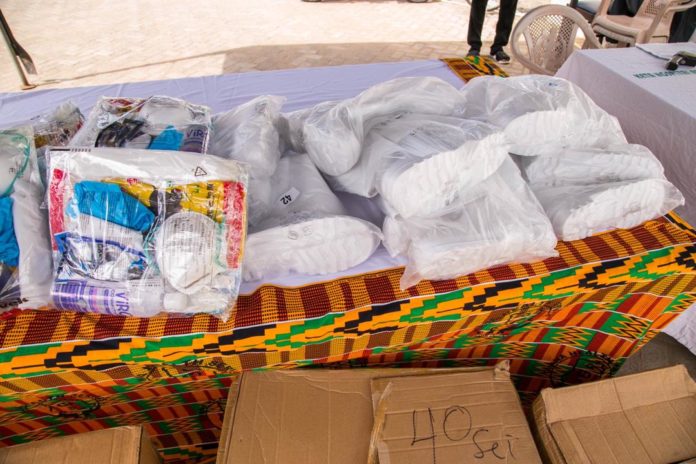 The Ghana Health Service has denied claims that a nurse was involved in an alleged stealing of some nose masks and other Personal Protective Equipment (PPE) at the Ashaiman Polyclinic.

Reports were rife earlier this week that some nurses at the facility were being questioned after a formal complaint was made to the police to the effect that boxes of the items were being carted from the hospital to an undisclosed location.

The report further alleged that the nurse behind the deal used an okada rider to cart six of the boxes. He was later invited for questioning following queries by one Foster Bampoe, an opinion leader and a failed Assemblyman, who had reported the matter to the police.

But in a statement, officials described the reports as “false” after a joint investigation by the police and the health directorate.

According to the Directorate, the PPE in question was consigned to one Mr. Joseph Nanor of Mararillosa-Dios Ltd, who is not a staff of the facility but had kept the items in a container “outside the walls of the Ashaiman Polyclinic unknown to management of the facility.”

“Our further investigations at our stores (Ashaiman Polyclinic inclusive) revealed the said items which were confiscated do not belong to our stock and do not match any logistics procured or donated to any health facility in the Ashaiman Municipality,” the statement further clarified.

“In view of that I want to state unequivocally that the allegation of a nurse at Ashaiman Polyclinic was caught having stolen PPE is false,” the statement which was released by the Ashaiman Municipal Director of Health Services, Mrs Patience Ami Mamattah ended.

This development follows several reports of theft and hoarding of government procured PPE.

Ghana’s Health Minister Kwaku Agyemang-Manu had revealed that some persons and institutions are hoarding personal protective equipment meant to be distributed to health centres that need them.

The Minister said the development was responsible for the regular claims of lack of PPEs in some health facilities across the country.

Mr. Agyeman-Manu at a meeting with health workers at the Greater Accra Regional Hospital had also said the ministry had begun investigations into the reports of hoarding and persons found culpable will be severely dealt with.

“The feedback we are getting is that some places still don’t get, especially the lower facilities. And on our own search we found out some people are hoarding the PPE and there are reports some are even selling it back to us… We are doing all that we can to try to stop those naughty things,” he said.

The Minister suggested that the government will be forced to deliver PPEs directly to institutions that request them to address the problem.

“The President has arranged for three key military officers to be added to the supply chain Committee, and wherever we want to send commodities to, we fly it so we are distributing to faraway places with aircraft,” he added.

Some health workers have been complaining about the lack of PPEs to work with as some have threatened to lay down their tools over the shortage.

Although the government has announced the provision of several PPEs, the complaints continue to increase especially for face masks, coveralls, and gloves.