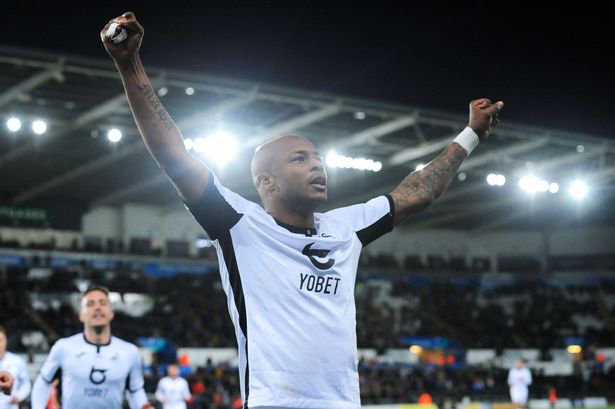 On a night when England’s top two leagues crowned champions who had long gone without glory, amid much fanfare, Swansea City were quietly drinking in their own bit of success.

The club had begun the day just outside the Championship play-off spots, three points behind Nottingham Forest, with a wretched run of form for the latter — not one win in their last five matches — allowing Swansea to creep up into their shadows. A third loss since the beginning of July, at home to Stoke City on the final matchday, eventually saw Forest overtaken. By the same 4-1 score that the two-time European champions lost their footing, Swansea beat Reading to slip through.

It was another game in which Ghana skipper, and Swansea vice-captain, Andre Ayew, made a goalscoring contribution — his 24th in all competitions this season. With Swansea in need of as many goals as could be scored, Ayew played his part again. It was Wayne Routledge’s 90th-minute strike that ultimately got them over the line, but the goal right before that came from a long throw-in flicked off Ayew’s bald pate, nicely into Liam Cullen’s path.

That gets Swansea another shot at making it back to the Premier League two seasons after getting relegated, when the Championship play-offs begin this weekend. First, a two-legged tie versus Brentford on July 26 and 29; win that, and an August 4 final awaits against either London-based Fulham or Welsh rivals Cardiff City.

Swansea have a one-in-four chance — as much as any of the other clubs, in theory — to secure promotion. Reality and history, however, suggest there are far greater odds to overcome if that is to happen. No sixth-placed team, since Blackpool a decade ago, has won the play-off final, and only two other teams that finished the regular Championship season in said position have reached Wembley in the ensuing period.

Experience would count, if success is to be achieved, and 30-year-old Ayew — in his second Swansea spell — should provide some of that and much more. He has now scored or assisted in every other league game for Swansea this season, and no player on the club’s roster has done more of either.

Ayew began the campaign a maligned figure in South Wales, with fans not liking him as much as they once did after the Ghanaian — ahead of the club’s first season back in the Championship — ran off to Turkey for a loan stint with Fenerbahce that, at a point, almost became permanent. Ayew’s goals, assists, and other stats — like his 69 tackles, the highest of any attacker in the league — this term, however, have won him back the lost affection, and then some.

“I can’t speak highly enough of him,” Swansea boss Steve Cooper, was quoted as saying, by Wales Online.

“Andre’s been really great hasn’t he? You’ve all seen him on the pitch and the contribution he’s made and the energy levels that he gives. He leads by example when he’s playing and when he’s training.”

Ayew’s three-year contract, signed on his return to the Liberty Stadium for a record fee in 2018, runs out next summer, and contract talks will be on the table, after Swansea sort out their promotion objectives. Regardless of how that pursuit ends, though, Ayew would have done his bit, and if he decides to walk again, it would be to applause, not abuse.

He is, after all, entering that phase of his career where the prospect of securing a big final paycheck seems far more appealing than a future in lower-tier football. But if — with his help, of course — Swansea are able to make the unlikely ascent to the Premier League this time, well, why not?