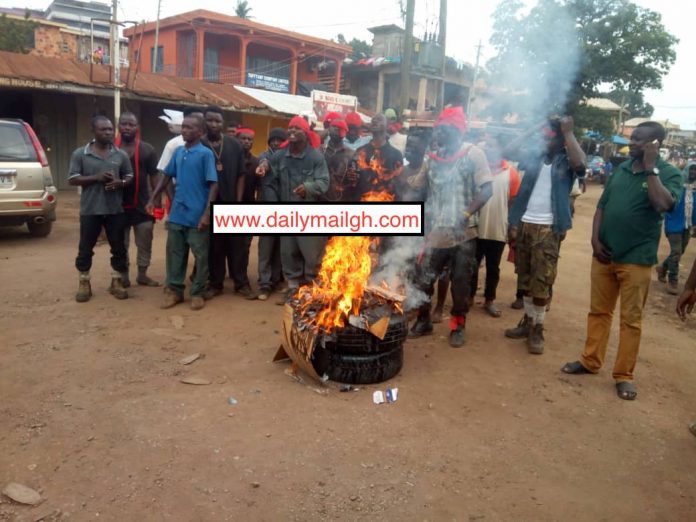 Chaotic scenes from the Suame Magazine Market in Kumasi as some Ghanaian retailers continue to unleash attack on their Nigerian counterparts.

Despite assurances by security forces the Ghanaian traders went on rampage Wednesday morning, as they burn tyres to mount pressure on authorities to have the Nigerians evicted.

Security has been beefed up at the enclave to maintain calm.

It is not immediately known whether or not the action is sanctioned by leadership of GUTA.

On Tuesday, Nigerian traders at Suame Magazine resolved to reopen their shops following assurances by the Ashanti Regional Police Command of an improved security.

It follows widespread attacks by their Ghanaian counterparts over claims the Nigerians are operating illegally.

The Nigerian traders who had earlier closed down their shops denied claims they are packing out of the market.

Police in the Ashanti Region have held separate meetings with the feuding factions and has assured to maintain law and order.

The leader of the Nigerian Community Chief Kizito Obiara Ukechukwu said his outfit will cooperate with the police to fish out miscreants in the enclave.

Meanwhile, police in the Ashanti region have assured of improved security at the Suame Magazine market.

They have vowed to deal with anybody who will cause trouble in the area.