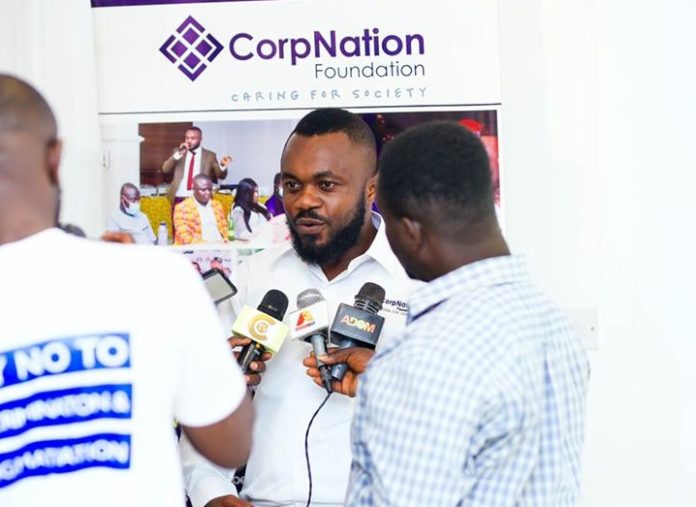 The CorpNation Foundation has launched its one-year anniversary in Takoradi last Friday (22 April).

The event was graced by Nana Agya Kwamina the XI of Apremdo, Kwame Malcolm programs manager of Radio 360, Albert Kwofie general manager of Sharp FM and a lot of dignitaries in Sekondi-Takoradi.

The CorpNation foundation has contributed so much to national growth in just one year, having gathered cents of youth to champion productive courses.

With the mobilisation of over 300 energetic youth into the subsequent formation of 12 youth clubs in 12 communities, the organisation of an inter-community football league and many others, CorpNation Foundation has surprised everyone with something totally different in its first year.

As part of the anniversary celebrations, we are launching the 4R+ initiative, which seeks to address the escalating plastic waste menace in schools and communities in Africa, starting in Ghana. The Piloting of the 4R+ Project will be launched in Ghana Secondary Technical School and New Takoradi on separate dates on the 29th and 30th of April, respectively.

“The CorpNation Foundation is here to stay and we urge all the youth in the various communities to find our corporate youth clubs and join to contribute their quota to Ghana and Mother Earth,” Savior Adzika, Founder, said at the ceremony.

CorpNation Foundation envisions a world where the potential of all youth is inspired, employed, and equipped to make them responsible and participating citizens for sustainable development in society.

As part of its vision, the foundation seeks to nurture and educate youth on valuable extracurricular aspects of life through both formal and informal learning activities, by providing them with appropriate platforms and resources that improve their mental wellbeing and overall responsiveness to youth development.