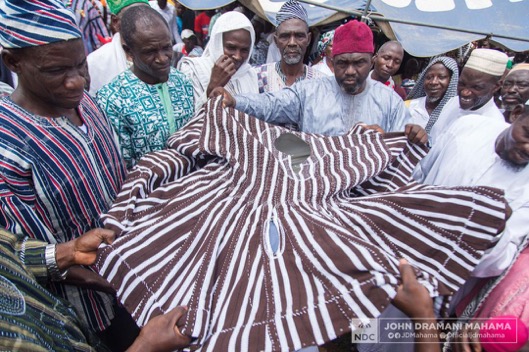 The beautiful but rather cryptic photograph above was taken by an enterprising press cameraman in a town called Galumpe in Bono East, one of the newly created regions. Its import would be made clear as this story commentary develops…

All Ghanaian ethnic groups have honorific titles for people deserving of honour. One of the best known is Osagyefo, a title reserved for major traditional rulers in Ghana’s Eastern Region but which was conferred on the country’s first President, Dr. Kwame Nkrumah. It is now almost exclusively associated with him, to the extent that when Osagyefo is mentioned it is automatically assumed to be referring to Dr. Nkrumah.

The Asantehene, Otumfuo Osei Tutu II invoked the Busumuru for the late UN Secretary General Kofi Annan whereas his Otumfuo itself is a title of majesty used reverentially for God and in human terms reserved exclusively for the Asantehene.

Generally, traditional rulers would be referred to as Nana (Akan), Naa or Naaba (Mole-Dagbane), Nii (Ga), Nene (Krobo) and so on with powers to honour deserving individuals with functional or symbolic roles. Roles that are supposed to be kept alive and active. Recipients of such recognition are presented with the right to attach the titles to their own names and other achievements.

Outside of traditional realms, individuals can have honorifics by the popular acclamation of admirers which then grow on the public and individual alike and over time become the defining image of such an individual, hence “Gentle Giant” for former President Kufuor, “Asomdwehene” for the late President Mills which have since become the popular accolades of the two former Presidents. Both Gentle Giant and Asomdwehene reflect the mild characters of the former and latter, whereas the Osagyefo reflected very much Dr. Nkrumah’s frontier achievements as the founder of our nation and his exuberant personality as he was also known as Kwame Nkrumah Show Boy!

Some of these titles are self-conferred or adopted (like Dr. Nduom’s Edwumawura) without any accompanying sacred rites but when they are conferred by traditional authority they are regarded as embodying the honour, dignity and soul of the traditional area and therefore invested with the appropriate gravitas.

And now about the beautiful picture captured by the enterprising young cameraman. It shows the moment of the enrobing of President John Dramani Mahama during an enskinment ceremony, in which the chiefs, elders and people of Galumpe in the Bono East Region invested him with the title of Kayite Wura. He was sat on a leather pouf on an animal skin three times, with sacred words of invocation, before the robe (a northern Ghanaian smock) was put on him with matching hat.

Kayite Wura can be loosely translated as “Patience Owner”. Patience in this context is of course what it is, but it also throws up the tolerance, compassion and humility of a person in authority who refuses to “throw his weight about”. It is a fair assessment of this freshly minted Kayite Wura because in his public life since he won an election to become an MP in 1992 to when he became the President of the Republic of Ghana in 2012, he has come to be associated with those values which even his political foes, if grudgingly, concede.

As he prepares for an election next year to actualise his second term, President Mahama’s first term was marked by steady progress of the country in an atmosphere of tolerance, peace and security. Paradoxically, within the same period he received very active calumny, insult and downright disrespect from those who wanted him out of power. The crescendo was in Election Year 2016 when the attacks and provocations and lies became a feeding frenzy. The media lapped up and regurgitated the negative campaign against him, some so called civil society organizations, even traditional rulers and “men and women of God” waded in. With firmness of resolve and steady hands on the steering wheel, he resisted using the awesome power of the presidency to go after anybody. All of these he took with patience and equanimity not paying like with like as he went into Election 2016 with a deficit from negatives piled up by all the calumny.  Significantly Ghana was witnessing un-matched positives in terms of achievements in economic development and international relations…

When the Electoral Commission declared him loser, he did not delay but with quiet dignity conceded. Many agree that the concession saved Ghana from tumbling over the brink. And yes, there were hardliners who did not want him to concede due to suspected tampering with the figures because the Electoral Commission’s system had been compromised with hacking…

Getting to three years after, it is not nostalgia for Mahama but a call, a need, a demand, for Mahama’s comeback…Many expect his patience to payoff in 2020 and so Kayite Wura is most definitely prophetic and propitious…