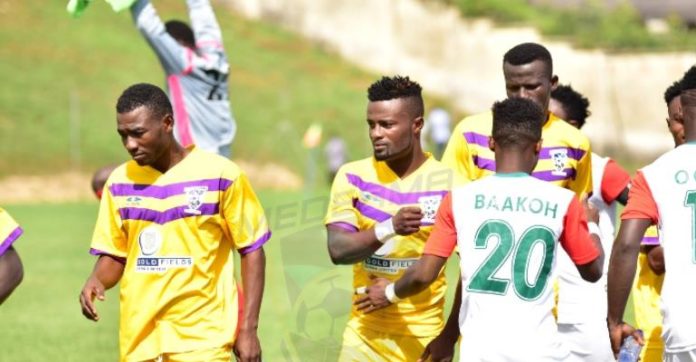 Karela United and Medeama SC — if you look hard enough — do feel like kindred, with the Nzema connection and all.

The 2019/20 Ghana Premier League season brought the pair something else to share: temporary tenancy of Tarkwa’s Akoon Park. Both had to move from formidable homes — the T&A Park that had always housed Medeama and Karela’s Crosby Awuah Memorial Park (CAMP) — that are undergoing face-lifts, but the Akoon Park has turned out differently for the two clubs: a fortress for one, slippery ground for the other.

Medeama — having not gone too far in relocating — have thrived, winning all but a game (one of those seven victories has now been chalked off for disciplinary reasons, but an appeal is on the cards). Only Elmina Sharks have picked any points — three — off Medeama on the pitch; the rest have left with tails firmly between legs. No team has won more home games and, supplemented by a decent assortment of results on the road, Medeama are just a point shy of topping the league table.

Karela haven’t had it as good. For a club which ‘finished’ the prematurely terminated 2018 season — their first in the top-flight — in third place and only two points behind Medeama, also reaching the final of last year’s Special Competition, the cogs haven’t exactly clicked into place for Karela thus far. Clearly, they didn’t bring their home invincibility — a record of many games unbeaten at the CAMP — with them from Aiyinase; if they did, it probably fell along the way en route to Tarkwa.

They’ve won just one of their last five matches and lost thrice overall, the latest coming last Sunday when Ashantigold visited and conquered. Theirs is the league’s fourth-worst record, and Karela’s lot is only worsened by poorer away fortunes, leaving them just above bottom boys King Faisal.

Later, if not sooner, both would have to pack up and head back to their respective refurbished turfs, but they could return as very different clubs. Medeama look in good shape to win their first ever league title to cap a growth curve that has already seen them win a couple of FA Cup trophies and enjoy continental action during the last few years. Karela, on the other hand, might not even have the comforts of elite status to cling to, now facing the very real threat of being relegated at the end of their first full season as a Premier League club.

It all goes to highlight how, in a competition with the peculiar dynamics of the GPL, home advantage — or a lack of it — is of significant value, potentially accelerating a team’s course towards its targets or throwing a spoke in the wheel. The Akoon Park, rather mysteriously, is now doing both in some style.