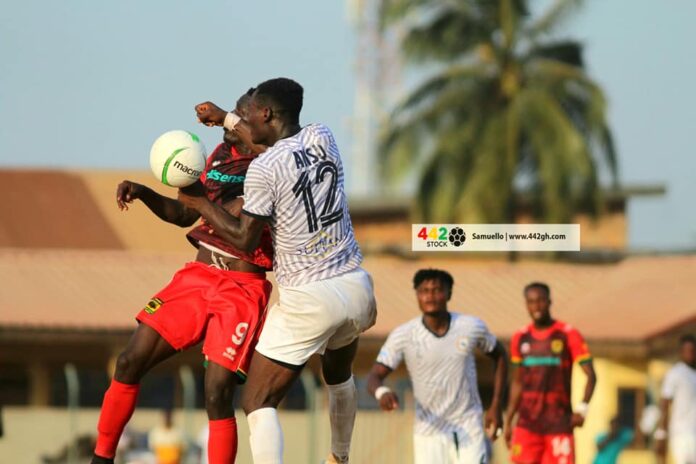 Well, then: welcome to The Silly GPL Review!

1TO HAVE PLAY AND TO HOLD

As we revealed last week, all 18 Premier League clubs agreed to hold each other on the season’s opening weekend in presenting a united front against the COVID-19 pandemic. The virus, however, knocked Hearts of Oak and Aduana Stars cold and out of that pact on Matchweek 1, but both had chances during the following round of games to make up for lost time. Hearts were held at home by Ashantigold on Tuesday, two days after Aduana and Faisal also did their own share of overdue holding… leaving WAFA, who beat Faisal and then lost to Bechem United, as the only club with an outstanding debt.

2OLYMPICS HAVE LOST THEIR IDENTITY

Great Olympics, after 66 years of existence, are suffering an identity crisis. The club, having flitted in and out of consciousness for much of the last two decades, doesn’t seem too sure of just what it represents these days (frankly, with all the nicknames, neither are we). And maybe that’s why, against Legon Cities, Olympics’ jerseys bore no badges. Hopefully, they’d find themselves — their best selves — soon enough.

Over the weekend, the Berekum Golden City Park was the big Premier League talking point — and rightly, even positively, so. A patchy pitch, compounded by some poor lighting, ensured that very little could be seen of the ball by fans watching on TV, while the players of Berekum Chelsea and Asante Kotoko had an even harder time navigating it conveniently. If football is art — and, at its very best, it is — the pitch is the canvas, but that fact hardly ever gets hailed enough. For once, though, Berekum gave us a pitch worth talking about!

You know that kid from school who was always so posh and polished and picture-perfect, yet couldn’t even get a date?

Well, that’s the pretty, pristine pitch at Karela United’s pimped-up Crosby Awuah Memorial Park, unveiled on the same Sunday that the turf in Berekum — yep, that rough and ragged kid who always seemed to get all the attention from the girls — was busy stealing headlines for all the wrong reasons.

We were better than Kotoko – Grant