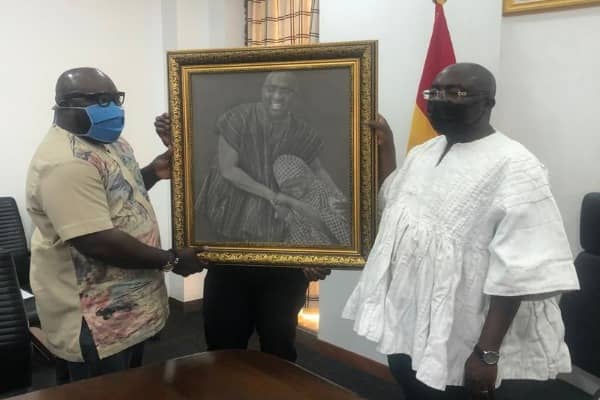 Vice President Dr Mahamudu Bawumia has expressed profound appreciation to members of his press corps for their thoughtfulness.

Receiving a portrait from the group ahead of his 57th birthday on Wednesday, October 7, he said, “This is the most touchy gift I have received on my birthday, it’s beautiful, it’s fantastic, I will keep it in my office”.

“We thought it wise as a group of journalists who have been following and providing coverage for the Vice President’s public engagements for almost four years that on his birthday, we should give him a surprise.

“So knowing his love for people who suffer leprosy or lepers, we decided to present a portrait of the Vice President depicting his sense of humanity and love for the vulnerable,” Mr Boadu said.

“And you could see from his face and comments that he was very happy with the gift we presented to him,” he added.

Vice President Bawumia is a patron of the Lepers Aid Ghana and an advocate of cured lepers and has been supporting them with donations over the years.

Dr Bawumia sponsored the construction of a two-bedroom house for an 82-year old cured leper, Madam Daari Pogo, who was abandoned by her family and was sheltering in a mud house in Motori in the Wa West District of the Upper West Region.

Dr Bawumia was born on October 7, 1957 to Alhaji Mumuni Bawumia and Hajia Mariana Bawumia in Tamale.

He was born into a large family and is 12th of his father’s 18 children and the second of his mother’s five children.