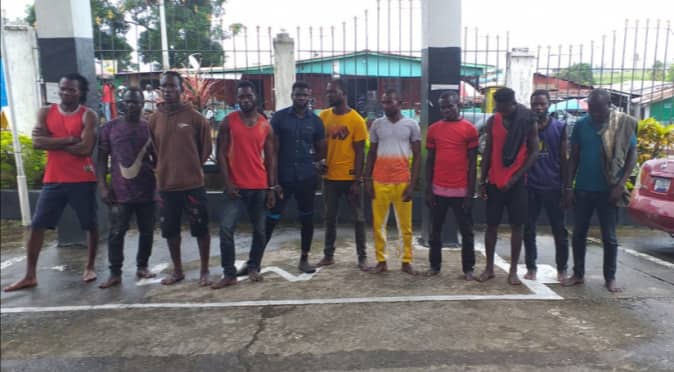 A joint operation comprising the National Security Agency (NSA) and the Ministry of Mines and Energy of Liberia has led to the arrest of 11 Ghanaian illegal miners.

The ‘illegal gold and diamond miners’ were arrested in Bong County, North-Central Liberia, the P

The suspects have since been handed over to the Ministry of Justice for further investigation and prosecution.

Addressing a press conference at the scene, Mines and Energy Minister Gesler E. Murray said the arrest is a significant milestone in the fight against the unlawful activities that continue to destroy the environment and rob the government of millions.

The men, he added, do not have any residential documents and were arrested at two locations in Bong County called samba and Wologbah.

“These Ghanaian nationals have no work permit and no resident permit so their status is undefined,” he said.

He called for sustained collective effort among the relevant agencies including the Liberia Immigration Services (LIS) and the Ministry of Justice to stop illicit mining across the country.

“If what is happening right now goes on unabated, it will have a huge consequence. Our water body is been polluted with mercury and other harmful substances,” he warned.

Speaking further, he made a passionate appeal to residents that are being affected by illegal mining to report these activities for quick intervention.

Meanwhile, the arrest comes in the wake of mounting pressure from lawmakers on the Ministry of Mines and Energy, and the security sector for not doing much to stop the large scale of illicit mining across the country.

Plenary’s decision was based on a communication from Rep. Rosana G. D. H. Schaack (District #1, Rivercess County) who complained that the illegal activities were posing a national security threat amid the continued sexual exploitation of women and girls at these sites, water pollution and other forms of environmental degradation, as well as the depleting of the country’s natural resources.

Minister Murray, appearing before the House, testified that the Ministry was collaborating with other agencies to combat the menace but inadequate resources were impeding their operations.

He mentioned that plans are being put in place to step up the government’s fight and called on the lawmakers to increase the ministry’s budget.

Liberia is rich in natural resources including timber, gold, and diamond but corruption and poor implementation of laws instituted to ensure proper management of these resources for optimum output have denied the country and the majority of its citizens from benefiting.

Currently, the forests and waters across the country are inundated with illicit miners, mostly foreigners with mining equipment like dredges and other harmful substances in search of these valuable resources.

Chaplain who raped a blind Ghanaian student in a classroom arrested