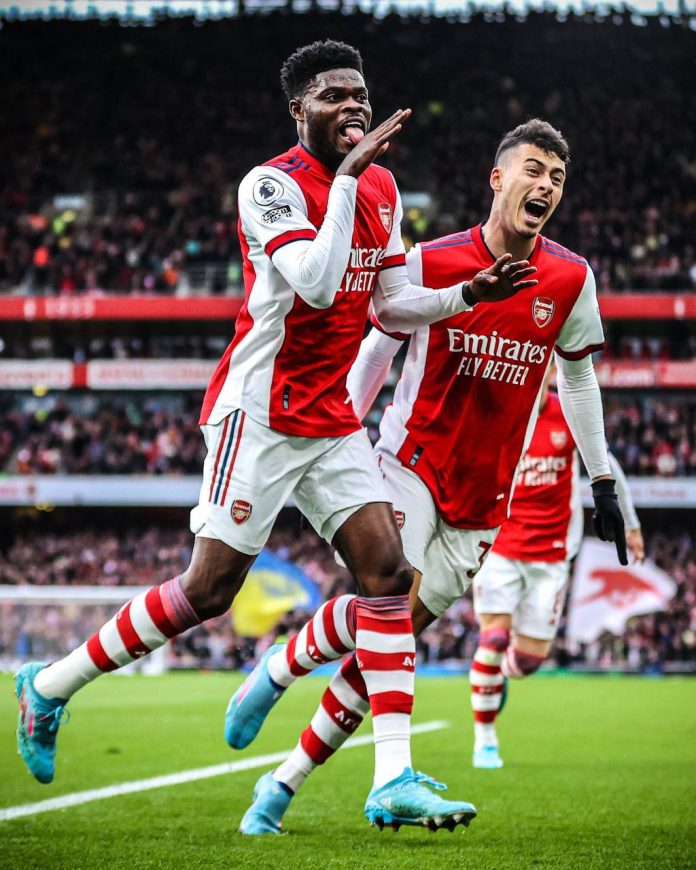 Thomas Partey netted his second league goal of the English Premier League season for Arsenal FC in their comfortable home win over Leicester City FC at the Emirates stadium on Sunday evening.

The former Atletico Madrid player went up in the air to connect with Gabriel Marinelli’s cross following a corner kick inside 11 minutes to break the deadlock of the match.

Partey controlled the midfield which allowed his teammates to play with freedom and stamped his authority in the game with eye-catching display and sleek passing throughout the match.

Arsenal goalkeeper, Aaron Ramsdale produced two great saves in the match to deny the visitors from scoring hence preventing his team from conceding a goal.

French man Alaxander Lacazette scored a second half penalty to secure all three points for the Gunners who are pushing for UEFA Champions League spot to win 2-0.

The 28-year-old Ghanaian international has played 21 games in the 2021-22 English Premier League and has two goals and one assist to his name for the Red and Whites.

Partey is expected to lead Ghana in the absence of Andre Ayew against Nigeria in the last huddle for a place in the next FIFA World Cup later this year in Qatar.

CLUELESS?: Ghanaians Are, Not Kwesi Appiah

How the wife of Kasoa police killer Eric Kojo Duah got...