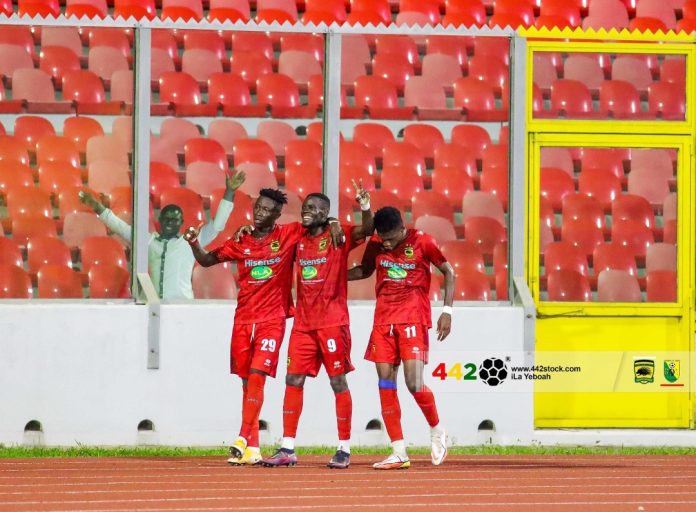 The Reds put five past the Green and Yellow Miners who looked lost on the field like strangers in Jerusalem in their first time ever playing under the lights in their Premier League match away in Kumasi.

Georges Rodríguez Mfegue was quick in the box to pounce on a catastrophic goalkeeping from the visitors to break the games deadlock with a fine strike.

Few minutes later, the striker was on the score sheet again, this time a delightful lobbing finish from just inside the box to the top right corner to make it 2-0 following a sweet setup by his campatriot Etouga.

Kotoko were very dominant in the first half and gave the away team a little room to operate as they took full charge of the match.

The first half ended 2-0 to Kotoko.

Back from recess and Kotoko were all over their opponents and got their third goal through Augustine Agyapong’deflected shot to make it 3-0.

The home team were awarded a spot kick after the ball was handled in the box by Enu and as expected the Premier League leading top scorer, Franck Thierry Mbella Etouga stepped up to connect to make it 4-0.

Etouga got his second assist on the night after setting up Samuel Boateng who came on to replace injured Mfegue to chip the ball over the goalkeeper who was in no man’s land to make it 5-0 win to the Porcupine Warriors.

This is the first time Kotoko has scored five goals in the last two seasons and opened an eight points lead over second placed Aduana Stars FC.