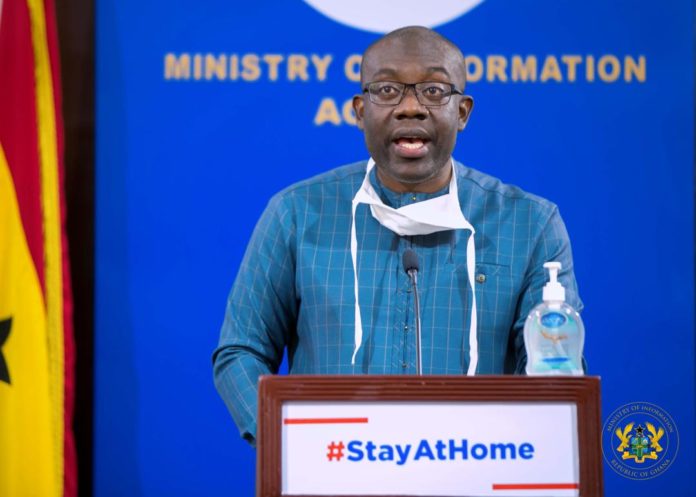 Ghana’s Information Minister, Kojo Oppong Nkrumah, has stated that Government’s fight against the novel coronavirus is possible because of the resilient economy it has in the past few years built.

Speaking at a press briefing today, 28th April, 2020, Mr. Nkurmah said Ghana’s ability to introduce the various interventions towards the fight against the virus in the country is largely dependent on the strong and robust economy it has built since the Government assumed office in 2017.

On Sunday, President Nana Akufo-Addo announced a policy objective to construct 88 district hospitals in the districts without government hospitals.

Additionally, he announced that building of the hospitals for the 6 new regions is to commence with dispatch aligned to this new program. A further 3 infectious disease centers are be built in the three belts of the country.

However, subsequent to the President’s address to the Nation, there have been concerns on whether the Government can finance the completion of these hospitals and whether or not the country’s economy is resilient enough to afford the COVID-19 interventions including building these 88 hospitals.

But the Information Minister gave the assurances that “our current economic positioning is a major reason for which we are able to marshal the resources to execute a good number of the interventions we are introducing today.

And moving forward, the state of our economy will be key in our ability to introduce the necessary interventions to win the various battles in this war.”

He explained that “it makes sense why some may question whether or not Ghana can afford all the interventions the President has outlined in the past about 8weeks of the Covid-19 response program. This question is justified because looking at our recent economic position, and the gains made recently as a nation, there is the genuine fear that we may be unable to afford the interventions or may end up overstretched if indeed we push through to execute them all.

“Between Jan 2017 and now however, Ghana has made major strides in correcting the precarious economic conditions it found itself in. Our Fiscal position has improved and our Macro position has significantly improved. The combined effect of improved fiscal position and improved macro position is what enables us to afford the interventions which are being introduced as part of the covid-19 response program. We have significantly improved national revenues, trimmed our deficit and yielded a resilient macro position against which we can finance the intervention programs,” he added.

Fuel prices in Ghana to shoot up