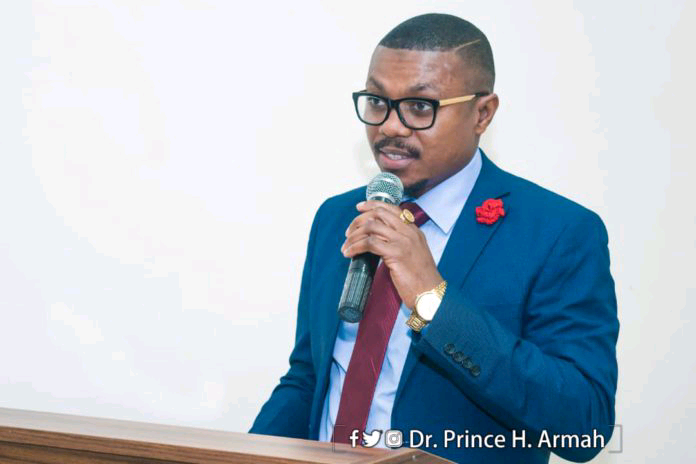 Dr Prince Armah, MP for Kwesimintsim
These reports have been very disturbing to all of us. As a country, our schools and education system were from the get go, not only to train and nurture our future leaders, but also to unify our country. Indeed, the study of our history and of the specific origins and culture of our major ethnic groups is meant to do exactly that. By studying the proud histories and traditions of the many great ethnic groups that make up our country, we inculcate mutual respect, understanding and even admiration in students. Our curricula over the years has never departed from this ideal.

This ideal was very much a priority in the formulation of the current, standards-based curriculum now in use. The framers of the curricula understood the need to use it as a tool for uniting the nation, inspiring patriotism and spurring acts of nationalism. I can personally attest to this because as the then Director General of the National Council for Curriculum and Assessment (NaCCA), it was my responsibility to ensure that the final work we presented, answered these very important questions.

In recent days, there have been reports of unsavoury content in some textbooks purported to be for use in our lower institutions of learning. In particular, some of these books have been found to have content that seem to cast some of our local ethnic groups in bad light. Others have been accused of distorting some of our historical experiences.

In line with modern best practices, NaCCA did not produce textbooks themselves. This time, independent publishers are to produce textbooks that conform to the curriculum, meet various technical and content requirements and pass a very rigorous approval process.

Under the Education Regulatory Bodies Act 2020 (Act 1023), it is only NaCCA that has the mandate to review, approve or reject books for use in our schools. These include but are not limited to textbooks, supplementary materials, e-materials or digital content, non-text materials such as manipulatives, puzzles, games and others.

The submission guidelines for publishers looking to produce textbooks for Ghanaian children, publicly available, set out very clear and non-negotiable standards that publishers must meet. They include detailed technical requirements including the quality of paper and the nature of binding that books must employ. It is instructive, given the current controversy, that the methodological requirements include “particular consideration of gender sensitivity issues relating to inclusiveness and stereotyping among learners”, among others.

For NaCCA to consider any textbook, a publisher must submit five copies, three of which must be without any identifying branding understood as anonymous copies. These are then provided to highly trained independent assessors who do not consult or even know one another. The assessors score the books using a detailed criteria mark sheet to which a book must score 80% on conformity to the curriculum and an overall minimum of 65% of the total criteria marks.

It is only after meeting these stringent requirements that NaCCA would empower a publisher to produce books for the mass market. Even then, the Council requires that publishers lodge copies of the final approved textbook with them so they can check if the version is the same as those in public circulation. A total of 1,107 textbooks and 370 supplementary materials have so far been approved for use under the Standards-based Curriculum for Kindergarten and Primary Schools through this process.

Here again, I can attest to the diligence of this process. During the period where I led the process, there were many books that were rejected for lack of quality, and many others that were only approved after the authors revised them to meet the very high standards that the council required of the materials. Indeed, so meticulous was this process that some teachers and parents complained about the length of time it was taking to approve books for use.

NaCCA, both then under my leadership and now, took and takes the matter of our children’s education extremely seriously and would not do anything to jeopardise that. Nor would it allow anyone, no matter who, to use educational materials to denigrate any tribe or score obscure political points.

As happens, however, there will always be elements who operate outside the law, skirt around it or blatantly ignore it. This is how, to the shock of many of us, we have found these substandard materials parading in the public space as ‘NaCCA approved’ textbooks. The offending books, it must be emphatically stated, have not been granted approval by NaCCA. The Council itself has made that clear and asked the publishers to withdraw the books. The publishers have themselves apologised, indicating an admission of error on their parts.

The fact that this potentially explosive situation occurred, however, should spur urgent action. It must be noted that while NaCCA is the only education regulatory body responsible for certifying textbooks, its powers do not extend to the enforcement of this process. In practice, what this means that those who flatly refuse to abide by the process and publish and circulate textbooks without NaCCA’s approval cannot be sanctioned by the Council. There are no clear penalties under its operationalising act, the Education Regulatory Bodies Act 2020 (Act 1023) that NaCCA can bring to bear when errant publishers endanger our children with poisonous materials.

By contrast, the Public Health Act 2012 (Act 851), the enabling act for the Food and Drugs Authority, for instance, gives it the power to levy “an administrative penalty of not more than two thousand five hundred penalty units” and even withdraw and destroy unapproved foods and drugs that find their way into the market. NaCCA does not have such corresponding powers and so cannot on its own motion, move to remove materials not in conformity with its standards from bookshelves.

This is where I believe that conversation must be centred. We need to give NaCCA the power to enforce its regulations and punish offenders. Without it, those minded to might well produce such books and sell to the unsuspecting public. We need to view the potentially destructive effect of illicit educational materials as akin to the insalubrious effects of contaminated food and drugs and act accordingly.

In addition, all of us should play the necessary role of scrutinising the materials on offer before purchasing for our children. To aid parents, schools and other institutions make buying decisions, for example, we introduced a short code from which one could instantly check the approval status of a book by texting the ISBN assigned to each book and displayed on its cover. The approved list of books is also available on NaCCA’s website.

We must recognise our collective role as stakeholders and help the regulator police the books on our shelves. It is commendable that the public took up this matter with the seriousness it deserves. Less commendable, however, are the actions of some people, who immediately sought to inflame passions for their own parochial purposes, and discerned a non-existing tribal agenda from unseen faces in our political space. To those individuals, my message is simple: this country is home to a rich and wonderful array of cultures and peoples who collectively make it great.  Neither this government or its agents will ever pit one tribe against another, nor any one ethnic group above others. We are all Ghanaians who belong here equally. Our educational system will always reflect this belief, entrench it in our young minds and ensure that there is peace, love and mutual respect between all tribes.

The writer is the Member of Parliament for Kwesimintsim, Vice Chairman of the Parliamentary Select Committee on Education and the former Director General of the National Council for Curriculum and Assessment

2024 Battle: Bawumia is defending champion; the darling of Kufuor and...