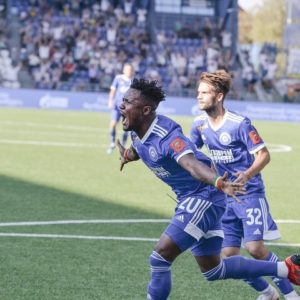 The Ghana International forward suffered relegation with the Blue and Whites from the Russia Premier League in the 2019-20 season.

Fameyeh started life in the second tier of the Russian football by scoring in the first game of the 2020-21 season to help Orenburg win away from home as they hope to bounce back from the National Football League.

The 23-year-old converted perfectly in the box on the 59th minutes of the match following a cross from Artem Kulishev to put the visitors one goal up.

The former Asokwa Deportivo workaholic and deadly striker was withdrawn in the 81st minutes of the match after his goal.

Orenburg held onto the lead despite the excessive pressure piled on them by the host to record their first win of the season to move to third on the league table after the first game of the campaign.

EINTRACHT FRANKFURT AND TONY YEBOAH LOVE STORY: -‘ From being severely...

Chelsea transfer ban reduced after appeal to Court of Arbitration for...