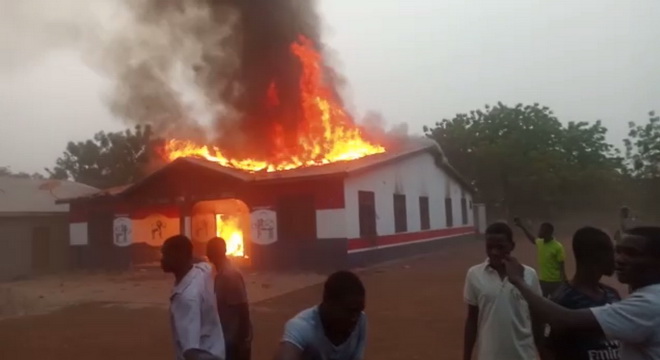 There has been a violent reaction by some youth of Salaga in the newly created Savannah Region following the naming of Damongo as the regional capital.

The irate youth have burnt down the head office of the ruling New Patriotic Party, as well as torn down signboards of party functionaries to protest their loss of hosting the regional capital.

Videos of the violence making the rounds on social media have the youth setting fire to the office amid shattering glass windows, while others hurl rocks at the building in attempts to raze it. Onlookers also had their phones recording the destruction.

Graphic Online’s Northern Regional correspondent Mohammed Fugu reports that the announcement of Damongo as regional capital by President Akufo-Addo on Tuesday was met with mixed reactions with the majority of the people approving the announcement.

The protest, however, contend that Salaga was more deserving of the honour because it has better facilities fit for a regional capital than Damongo.

Meanwhile, Mohammed Fugu reports that there has been widespread approval of Nalerigu as the regional capital of the newly created North East Region, also announced on Tuesday after official ceremonies at the Jubilee House in Accra.

Gap between north and south being bridged – Bawumia