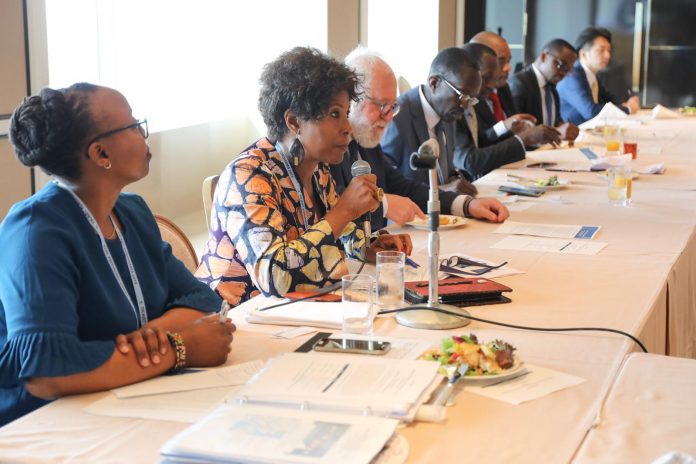 Africa can achieve its development objectives if the continent’s vast resources are effectively channeled for the benefit of all citizens. This, according to the Assistant Secretary General and Regional Director for Africa of the United Nations Development Programme (UNDP), Ms. Ahunna Eziakonwa, can be realized if Africa strives to improve resource governance and unlock all other potential leakages, such as illicit financial flows that cost the continent significant amount of resources.

Speaking at a lunch meeting, she hosted at the 7th Tokyo International Development on African Development (TICAD7), to deliberate on a platform for promoting investment of “Africa’s Money for Africa’s Development”, Ms. Eziakonwa noted:  “We need to awaken serious conversations to bring about the structural changes required to ensure that Africa’s money serves the needs of its people”.

To achieve the Sustainable Development Goals (SDGs), it is estimated that Africa requires about 200 billion to $1.2 trillion each year. However, according to the 2017 Global Financial Integrity report, Africa loses more than $50 billion annually to illicit capital outflows (money earned illegally and transferred elsewhere) mainly from  trade mis-invoicing  which represents about 33% of Sub Saharan Africa’s trade with developed countries between 2006 and 2015.

According to Ms. Eziakonwa, the $50 billion Africa loses in a year through illicit capital outflows alone can construct more than 73000 Km of paved roads, 926 hospitals and 2.4 million classrooms. Effectively capturing and investing domestic resources would reduce the current funding deficits, increasingly financed through external borrowing. She quoted the World Bank’s 2019 international debt statistics, which reveals that Sub Saharan Africa’s combined external debt stock rose from $452 billion in 2017 to $535 billion in 2018, and the region’s debt accumulation is outpacing borrowing by low and middle-income countries elsewhere.

“If we are saying that Sub Saharan Africa is rich, let us change the conversation to target Africa’s resources and ensure that they are kept within the continent, and effectively utilized to serve its people”, Ms. Eziakonwa indicated.

She called for a change in the narrative and renewed partnership between African Governments and all stakeholders through revitalized platforms for development discourse on the management of Africa’s resources for the continent’s development.

The proposed platform in the context of World Economic Forum in Africa is expected to complement UNDP’s existing programmes that are supporting domestic resource mobilization globally and in Africa. To date, UNDP has at least 24 programmes through its Tax Inspectors Without Borders Initiative (TIWB) in partnership with the Organization for Economic Co-operation and Development (OECD), which is already expanding fiscal spaces in many countries. The TIWB initiative has so far managed to recover up to $244.2 million in tax mis-invoicing through its focus on tax audits in Africa alone. UNDP is also actively engaged in Domestic Finance Assessments (DFAs), which are expanding the scope of domestic financing, including opening doors for broader discussions on natural resource management within countries.

TICAD7 was held from 28 to 30 August 2019 in Yokohama, Japan, and focused on advancing Africa’s development through people, technology and innovation. The conference was organized by the Government of Japan in collaboration with UNDP, the African Union Commission (AUC), the World Bank, and the United Nations.