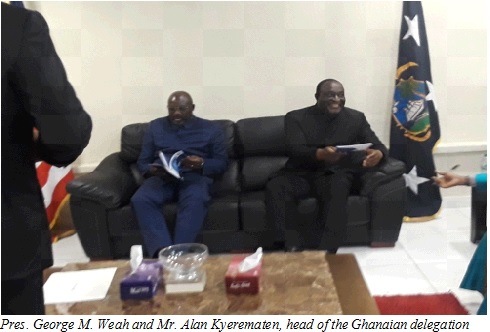 Liberia president George Manneh Weah has welcome Ghana’s bid to host the secretariat of the Africa Continental Free Trade Area (AFCFTA) referred, saying such secretariat will help to boast trade in the region.

Speaking when a high power Foreign Ministry delegation from Ghana paid a courtesy visit at the president’s office Monday, the Liberian leader said it is about time for Africa to be more robust and do more in strengthening economic related trade on the continent.

Also speaking during the brief meeting, the head of the Ghanaian delegation, Alan Kyerematen, praised president Weah for his level of leadership which is helping to gradually strengthen the Country’s growing democracy.

He said Ghana, as part of the seven African nations biding for the secretariat, is ready to host the AFCFTA because it has the political will, strategically located with skills individuals including a stable economy.

Minister Kyerematen said Ghana, has over the period, played a key role in the process leading to a free trade market on the continent dating as back as 2012 among others.

He said the West African nation also has all the necessary infrastructures already available and in place to host the secretariat, and has met all fulfilled requirements among member states to host such secretariat.

Egypt, Kenya, Ethiopia, Madagascar, Senegal as West African nations have bowed out due to Ghana’s interest among others, as African nations bidding to host such secretariat.

Meanwhile the Liberian leader has promised to build a modern market for the people of Old Road in thirty one days, noting that the plan for the structure is well in place as the commencement of the project will be beginning soon.

He urged the marketers to help maintain the facilities by providing it good care when completed, and told them to avoid streets selling, a reason why he continues to build modern markets in the city.

The market project, when completed late July, will be the second to the Duport Road Market recent dedicated by the Liberian leader after its construction in less than four months.