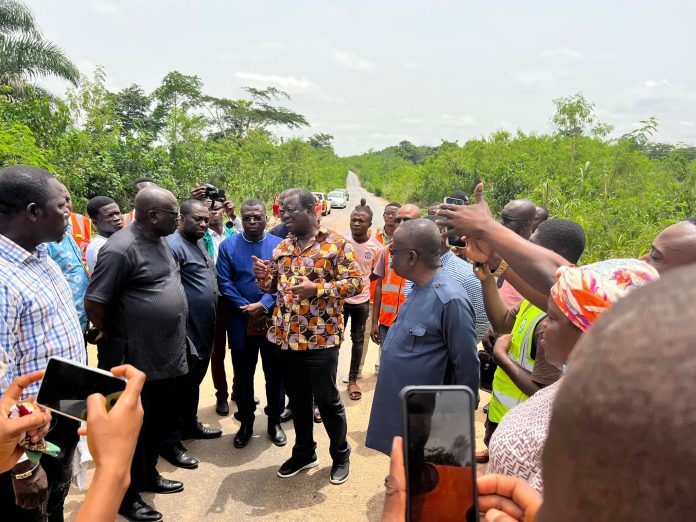 Minister of Roads and Highways has summoned engineers who supervised a recently constructed bridge on the Nsuontem-Offinso road for questioning.

Mr. Kwasi Amoako Attah who was on a working visit to the Ashanti Region gave this directive when he discovered the bridge had been washed away following torrential rains, cutting off residents from other adjoining communities in the Afigya Kwabre North District town.

“Which engineer supervised this kind of dirty work? Which engineer? I am really surprised of what has happened here”, the Minister fumed.

“It was under whose supervision, let them cover it. Government cannot waste resources on such useless works. Which engineer supervised it? errh which engineer? Tell me. Where is he? Is he still in the system?” he asked.

The said engineer is expected to report to the Minister’s office on Monday (23 May).

The collapsed bridge has now become a death trap. Residents have launched a desperate appeal to get it fixed.

In his interaction with chiefs and opinion leaders Mr. Amoako Attah who was outraged over the development, however, assured that the bridge will receive immediate attention within the shortest possible time.

“You have an assurance from the President. No area will be cut off [from adjoining communities]. The President has sleepless nights whenever such cases are reported. I have seen things for myself, and we shall not disappoint you. Going forward I will be engaging the engineers and a permanent decision will be taken [to fix the bridge]”, he said.

MP for the area Collins Adomako-Mensah in a Facebook post said: “The [Roads] Minister after my report to him, decided to personally visit the site. Today, in the company of the director of feeder roads, director of urban roads and director of highways in the Ashanti Region, the Minister fulfilled His promise.

“We took the opportunity to visit Abroma, where the chiefs and people had gathered. Minister took time to assure indigenes of Abroma that the road from Soko to Adukro through Abroma will be constructed. At Nsuontem where the bridge had caved in, the Minister instructed that works on its reconstruction should be a priority”, he indicated.

Anaesthetists in Ghana to declare another strike on Friday