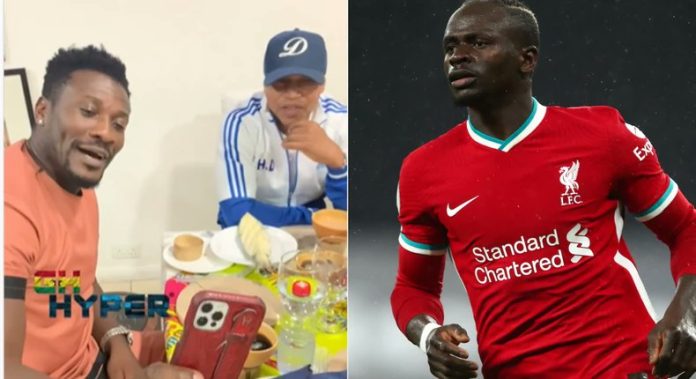 Mane equalled Ivorian legend Didier Drogba’s record in the UEFA Champions League competition when he scored in the semi-finals of Europe’s flagship inter-club competition for the Reds against Villarreal.

Gyan spoke to Mane via the phone of fellow legend El Hadji Diouf, who is currently in Ghana for the launch of the Ghanaian’s autobiography titled ‘Legyandary’.

“We’re happy for you. Nice goal last night and congratulations. Your guy (Diouf) told me about you and he said he’ll call so that I speak to you,” Gyan said.

“You’re the man of the moment and we’re praying for you. Everything is going to be fine… We watch you every week, you and Salah are the face of Africa now and we pray for you.”

Meanwhile, Gyan recently stated that he wishes to feature at the Qatar 2022 World Cup, but was quick to admit that he is currently not fit enough to play at the top level.

The veteran striker hasn’t played for the Black Stars since the 2019 Africa Cup of Nations (AFCON) and has been blighted by injuries.

The 36-year-old returned to the Ghana Premier League last season after signing for Legon Cities, but rarely played before parting ways with the club after just a year.

He, however, explained that he is currently not fit enough to play at the highest level, which all but rules out his chances of playing in Qatar.

“Yes, I have tasted the World Cup three times and though I would love to play at this year’s World Cup, as I have always said, I am currently not fit enough to play active football but when I Start playing – who knows?”

The former Sunderland and Al Ain forward further revealed that he will be in Qatar for the World Cup as a pundit.