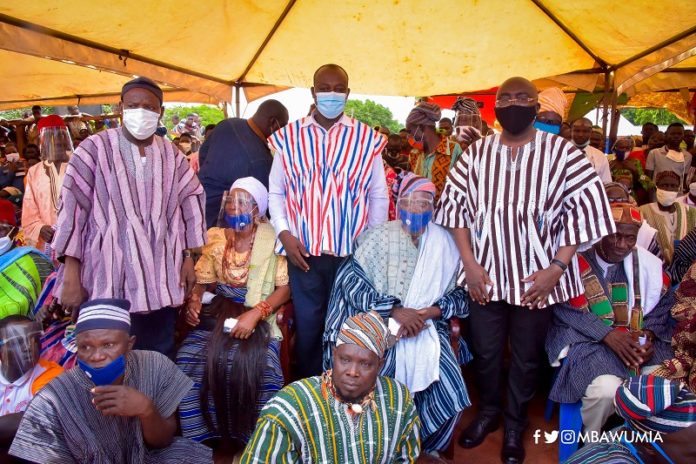 The Paramount Chief of Tatale Traditional Area Oubore Gariba Yankosor, has commended President Akufo-Addo for the life-changing policies his government has introduced since assuming office.

Addressing a durbur in honour of Vice President Dr. Mahamudu Bawumua at Tatale on Friday 3rd September 2020, Paramount Chief said Tatale and its environs have received their fair share of the President’s nationwide impactful interventions, and that they have good reasons to back the President’s bid for another term.

“On behalf of the chiefs and people of the Tatale-Sanguli District, I express our appreciation to His Excellency, Nana Addo Dankwa Akufo-Addo and His Vice, Alhaji Mahamadu Bawumia for the numerous life changing policies they have initiated and implemented since the NPP Government assumed power that has gone a long way to improve the lives of the people in the District, and the country at large,” said Oubore Gariba Yankosore.

The Paramount Chief listed specific interventions by President Akufo-Addo, which he said are being felt by the district and beyond.

“I wish to thank you for the laudable flagship policies and programmes your government has initiated since assuming power for which the district has received its fair share.”

“Some of which include the Free Senior High School Education, which has relieved parents of the burden of school fees; the Planting for Food and Jobs, One Village One Dam, etc.”

The Paramount Chief reserved special praise for the government’s  Planting for Food and Jobs, which he said has been beneficial to farmers in his community, as well as the One Constituency One Ambulance initiative.

“Furthermore, under the Planting for (Export and Rural Development), most of our farmers have benefitted from the supply of free cashew seedlings annually for the past three years from the District Assembly.

“Your Excellency, Tatale also received its ambulance under the policy of One Constituency One Ambulance. The Ambulance since its arrival has continued to provide the necessary emergency medical services to the people of Tatale-Sanguli District.”

The Paramount Chief noted despite the massive projects provided by the Akufo-Addo government, the district like Oliver Twist, the Tatale-Sanguli district is behind in infrastructure development.

“We know your government can do that is why we want to go Nana Akufo-Addo four more to do more,” the Paramount Chief stressed.

In his address, Vice President Bawumia said in just three and half years, the government of President Akufo-Addo has brought more development in the Tatale Sanguli District than the NDC did in eight years.

He assured the Paramount Chief and the people of Tatale that President Akufo-Addo is committed to providing more development in the area and the northern part of the country in general.

The Vice President announced that government has secured funding from the World Bank for the rehabilitation of the Yendi-Tatale road, which links Ghana and Togo.

He added that processes are underway and a contractor will be on site to start work by the end of the year.

Dr. Bawumia further indicated that the road is of utmost priority to the government of President Akuffo-Addo because it will bring many benefits, including improving international trade.

Dr. Bawumia also announced that as part of government’s vision to explore other minerals apart from gold, the Akufo-Addo government has decided to focus on exploring iron ore and bauxite, hence the government’s decision  to create authorities and corporations for their management and exploitation.

The Vice President added that the Tatale area, which has a rich iron ore reserve in Sheni,  will become one of the centres of government’s iron ore exploration vision.

The Vice President introduced the NPP  Parliamentary Candidate for Tatale Constituency Patrick Mbomba and urged the constituents to continue to support the government by voting for President Akufo-Addo and the NPP Parliamentary candidate in December.