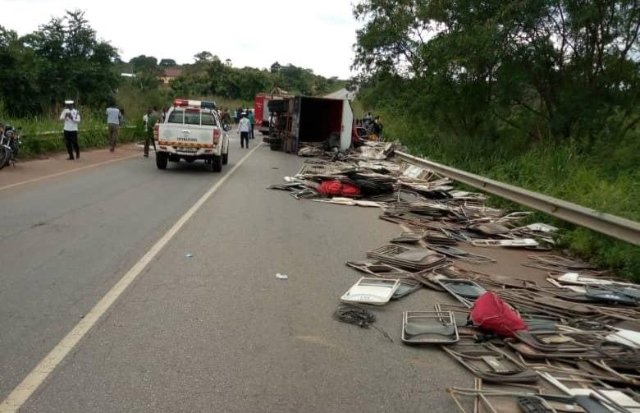 The Techiman-Kintampo highway at Tuobodom in the Bono East region has claimed the lives of eight persons in another crash, police confirmed on Friday.

The Bono East MTTD Regional Commander, ASP Andrews Okonengye said the truck which was conveying school desks collided head-on with the Taxi which had passengers travelling from Kranka in the Nkoranza North district to Techiman.

The driver of the truck reportedly lost control and veered into the lane of the oncoming taxi cab resulting in the collision.

ASP Okonenge said two persons died on the spot but later the death toll jumped to eight after six others including occupants of the truck died at the Holy Family Hospital at Techiman.

At the time of filing this report a number of police officers were at the scene to move the mangled vehicles to the police station as traffic jammed.

The development comes after a Police Inspector was killed on the same stretch at Nante Zongo in less than 12 hours.

The deceased, Inspector Foster Ampomah with the MTTD was on duty with his colleagues when the incident happened.

He was pronounced dead on the spot after the cargo truck with registration number GE 7562—14 was en route to Kumasi from Bolgatanga.

The driver has since been detained.

There has been several cases of road Carnage’s on that stretch.

Earlier in March this year, a head-on collision involving two buses claimed the lives of over 70 people.

Some of the victims were burnt to death.

The government prior to the incident published measures to deal with carnage on Ghana’s roads.