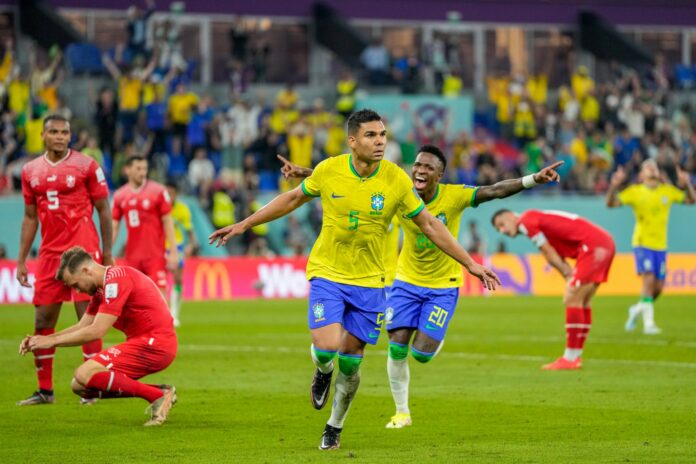 The Samba Boys of Brazil danced their way through to the next stage of the 2022 FIFA World Cup tournament in Qatar in Group G with a slim victory over European side Switzerland on Monday evening.

A late Casemiro goal took Brazil into the last 16 of World Cup 2022 as the resistance of a dogged Switzerland side finally cracked late on in the second round of Group G games.

Deprived of Neymar by injury, Brazil struggled to find a way through a typically disciplined Switzerland defence, Vinicius Junior having the best chance of the opening period when he drifted into space at the far post only to fail to connect properly with Raphinha’s cross, allowing Yann Sommer to save.

Switzerland more than held their own and had glimmers of openings without ever really creating a gilt-edged opportunity with neither side finding it easy to unlock the opposing backline.

Brazil brought on Rodrygo at the break and he was soon linking up with his Real Madrid teammate Vinicius, who sent in a sumptuous cross with the outside of his right foot that Richarlison only narrowly failed to turn in.

Brazil were turning up the heat and just past the hour thought they had broken through when Rodrygo played in Vinicius down the left to skip Nico Elvedi’s challenge and roll the ball past Sommer. A lengthy VAR check found Richarlison to be offside earlier in the same phase of play, however, and the effort was chalked off.

The South American side would not be denied, however, Vinicius and Rodrygo combining once again seven minutes from time to work space in the area for Casemiro, and a fine half-volley flicked Manuel Akanji on its way past Sommer and inside the far post.

Sommer pushed over Rodrygo’s effort with Akanji blocking another goalbound Rodrygo strike in added time, but Brazil had already done enough to join holders France in the last 16 after Serbia and Cameroon shared an extravagantly entertaining 3-3 draw in the early game in Group G.

ONE OF A KIND: Africa Counts on Mendy’s Success as Much...