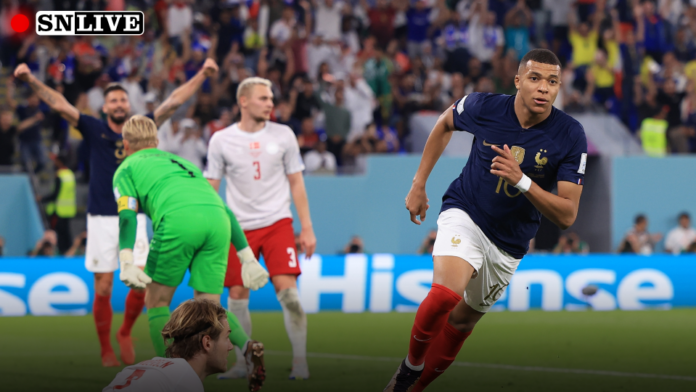 Les Bleus of France are the first defending champions from Europe since 1994 to qualify for the knockout stages of the subsequent FIFA World Cup tournament after beating another European side Denmark.

Kylian Mbappé was the starman again for the defending champions as the beat De Rød-Hvide in their second group game of the 2022 FIFA World Cup tournament in Qatar on Saturday evening.

The French star got his second and third goals of the tournament against Denmark and has caught Enner Valencia of Ecuador, who also scored three in two games.

Mbappe scored both of his team’s goals against Denmark in a victory that qualified France to the Round of 16. That came a day after Valencia put home an equalizer against No. 8-ranked Netherlands, though there’s concern over a right knee injury picked up by the former Premier League forward.

It took until the 86th minute, but France successfully exacted revenge on Denmark for their two Nations League defeats in the summer, with a Kylian Mbappe brace securing three valuable World Cup points in a 2-1 victory over their European nemesis.

The victory puts France clear atop Group D with six points, and Les Bleus become the first nation at the 2022 World Cup to mathematically secure a knockout stage place.

It was a resounding performance from France throughout, and Les Bleus were unlucky to reach halftime without securing the opener. They finally managed to do so just past the hour mark, as Mbappe snuck a shot between two defenders and past an in-form Kasper Schmeichel to put France in front.

Denmark gave it a real effort, and they equalised shortly after against the run of play, with defender Andreas Christensen heading home past Hugo Lloris on a set-piece. Yet they could not hang on amidst relentless French pressure, and Mbappe played hero yet again with his second goal just four minutes from time.

Don’t use vaccines as tool for immigration control; It’s retrogressive –...