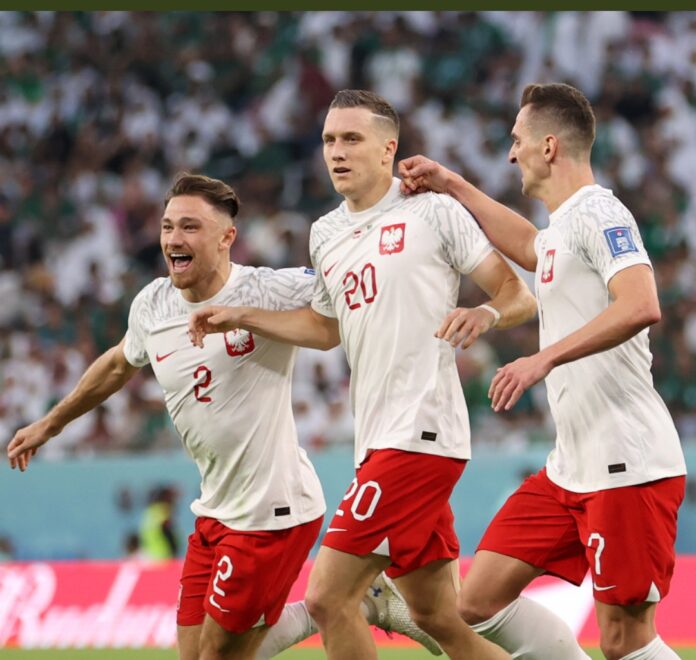 The Green Falcons of Saudi Arabia could not punch above their waits again as the Eagles proved too strong in their 2022 FIFA World Cup tournament in Qatar clash on Saturday afternoon at the Education City Stadium in Al Wakrah.

The Green Falcons who defeated Lionel Messi’s Argentina in their first 2022 FIFA World Cup tournament game started the game on a blistering pace with high intensity of play and swift passing which left the Polish team chasing shadows in the opening exchanges of the frenetic encounter.

The Middle East team were the better side throughout the match with jaw-breaking and mouth-watering display against the Europeans as they took full control of the match creating the best goal scoring opportunities and fine football to wow fans at the stadium who were in anticipation of another great win to secure a round of 16 spot.

Unfortunately, Piotr Zielinski’s clinical first-half and Robert Lewandowski’s first goal at a World Cup finals tournament gave Poland their first points in Qatar and brought Saudi Arabia back down to earth after their sensational win against Argentina in Group C.

Napoli midfielder Zielinski fired in a thunderous volley to open his nation’s account at the finals after Robert Lewandowski connected with Matty Cash’s cross six minutes before the break.

Arkadiusz Milik and Robert Lewandowski both hit the woodwork before the Poland captain gleefully pounced on a heavy touch by Abdulelah Al Malki to double Poland’s lead late on.

The testy early stages saw five bookings – the most in the first half of a World Cup match since the notoriously physical 2010 final between Netherlands and Spain.

The two sides are now level on three points, meaning all four teams in the group will be capable of qualifying on the third and final matchday.

Poland face Argentina in their decider, while Saudi Arabia will attempt to make the round of 16 for the first time since 1994 when they meet Mexico.