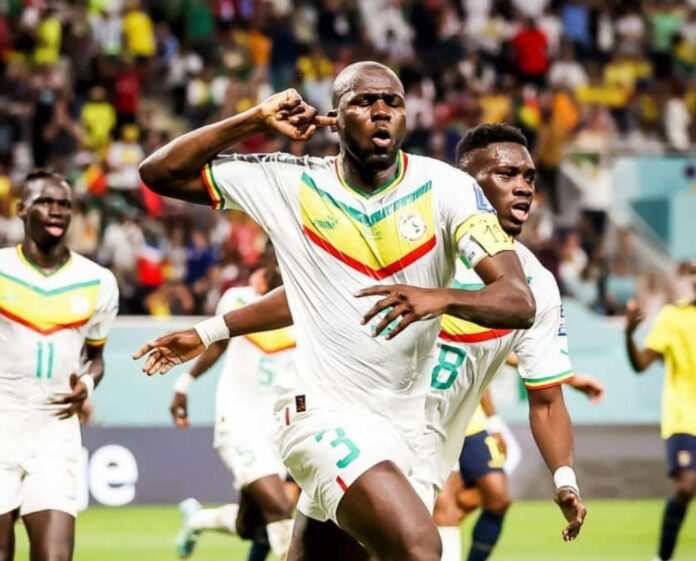 The Teranga Lions of Senegal roared at the crucial moment to scare La Tricolor of Ecuador at the ongoing 2022 FIFA World Cup tournament in Qatar in their last group game to reach the round of 16 stages.

The African country who reached the quarter final stage 20 years ago at the 2022 FIFA World Cup tournament in South Korea and Japan have made it out of group as they await winners of group B with the Three Lions in pole position to finish first in Group B to face the west African country.

Kalidou Koulibaly volleyed home a precious winner to send Senegal through to the Round of 16 at the 2022 World Cup in Qatar at the expense of Ecuador.

Needing a win to qualify, with the Netherlands beating Qatar as expected to top Group A, the African champions went in front just before half-time when Piero Hincapie bundled over Ismaila Sarr, who picked himself up to calmly convert the penalty.

It was a deserved lead for the Lions of Teranga, who had missed a series of early chances with Idrissa Gueye and Boulaye Dia both dragging shots wide.

But Ecuador equalized in the 68th minute when Moises Caicedo tapped in from a corner.

La Tri were only level for two minutes though as Gueye’s free-kick dropped to Koulibaly in the box and the Chelsea defender lashed it home with a superb right-foot volley.

Ecuador, who won their first match against Qatar before drawing 1-1 with the Netherlands, tried desperately to force an equaliser which would have seen them progress to the knockout stages for only the second time in their history.

But Senegal held on to book a possible meeting with England, or whichever team finishes top of Group B after today’s later matches.