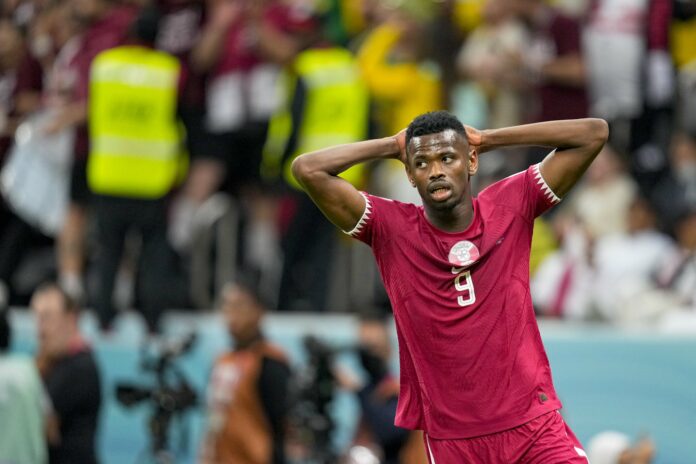 2022 FIFA World Cup tournament hosts, Qatar have set an unwanted record by becoming the first host nation to lose their opening game of the tournament in history.

They suffered defeat and produced an underwhelming display on in Sunday evening in their first ever FIFA World Cup tournament.

No country hosting the tournament had ever lost the opening game with 15 wins and six draws in previous 21 editions of the tournament.

Enner Valencia scored a first-half double as Ecuador overwhelmed hosts Qatar on their way to a routine 2-0 win in the opening game of the 2022 FIFA World Cup.

Valencia had an early header ruled out for a marginal offside call against teammate Michael Estrada, via a questionable VAR review, but he did not have to wait long to celebrate after winning and coolly converting a 16th-minute penalty.

It meant Ecuador’s captain became the first player in his country’s history to score four goals in World Cup finals, and he made it five after the half-hour mark, heading home Angelo Preciado’s wonderful right-wing cross.

Qatar will rue their joint-record scorer Almoez Ali passing up a glorious chance just before halftime but, in reality, Felix Sanchez’s side were nowhere close to the quietly building pre-match expectations, as they were comprehensively outplayed.

Goalkeeper Saad Al-Sheeb was spared by the early VAR intervention when he failed to claim a set-piece and Valencia headed into an unguarded net.

Qatar’s No.1 did not make the most of that let-off, though, when he clumsily brought down Valencia in the area soon afterwards, leaving referee Daniele Orsato with little choice but to point to the spot after the Ecuador striker had darted onto Estrada’s nicely weighted throughball.

Valencia waited to send Al-Sheeb the wrong way from the resulting penalty and his finish for the second goal, arrowed into the bottom left corner, was similarly clinical.

Estrada then missed his kick when the goal his work-rate deserved beckoned after some excellent work from Gonzalo Plata, with the only concern for Ecuador boss Gustavo Alfaro coming as the hero of the hour, Valencia, hobbled off with a knee injury 15 minutes from time.

Substitute Mohammed Muntari rippled the top of the netting with a late effort, but there were precious few reasons for Qatari encouragement.

Qatar will face African Champions Senegal in their next game on Friday.