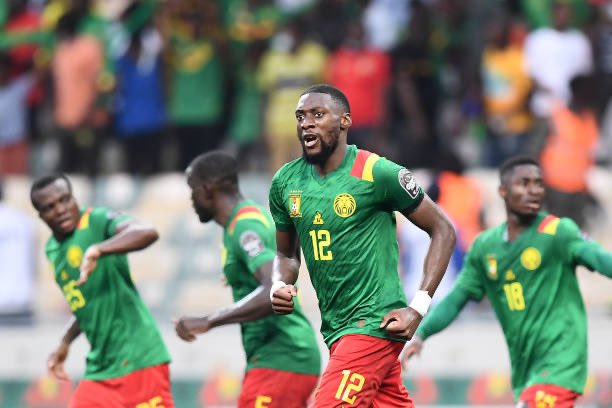 The Indomitable Lions of Cameroon walked over crawling Scorpions of Gambia to book a place in the semi-final of the ongoing Africa Cup of Nations tournament.

The host made their intentions clear right from the blast of the referee’s whistle and made life very difficult for the debutants throughout the first half.

Cameroon pushed the Gambians back into their own backyard with high pressing game and in full control of the match.

Captain for the Indomitable Lions, Vincent Aboubakar came close to opening the scoring in the 15th minute of the match to put the hosts in front but his improvised back-heel attempt deflected off the Gambia defender to go over the crossbar.

Moments later, the striker came close again after he beautifully connected his head to Fai Collins’ cross but Gambia goalkeeper Baboucarr Gaye produced a masterclass save to keep the game at 0-0 at the break.

Gambia in the first half had no shot at goal as they were mainly inside their half for the entire 45 minutes.

Five minutes after the break, Fai Collins sent in a pinpoint cross from the right side of attack as they Gambians went to sleep and Karl Toko Ekambi rised highest in the box to head into the bottom left corner to make it 1-0 to the dominant Indomitable Lions.

Seven minutes later, Martin Hongla set up Ekambi again to tap into the empty net from the right side of the box into the roof of the net to make it 2-0.

Gambia started going forward after their coach made three changes but it was a little too late for them to salvage the game.

Clinton Njie, who came from the bench had a glorious chance to make it three but his effort was saved by the goalie before Aboubakar blasted over the crossbar.

The five-time AFCON Winners won the game 2-0 to kick out the first-timers from the tournament.

Cameroon will meet the winner of Egypt and Morocco’s clash at the semi-final of the ongoing Africa Cup of Nations tournament on Wednesday.