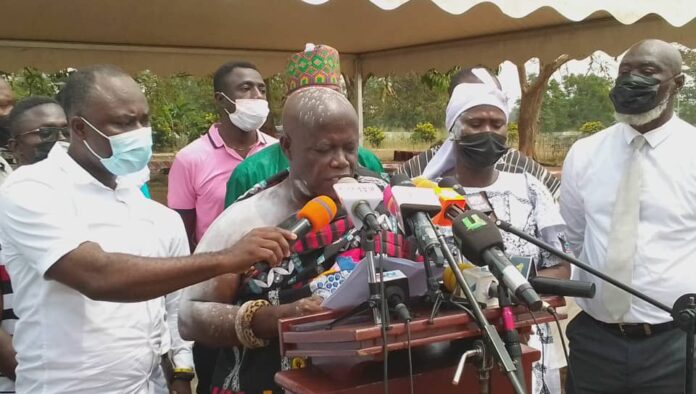 The Agona Akrofonsohene, Nana Owusu Achaw Brempong has been re-elected the Ashanti Region’s representative of the Council of State.

The 66-year-old polled 77 votes beating six others to win the sole slot.

In his acceptance speech, Nana Owusu Achaw Brempong thanked the delegates for believing in him and assured that he will present the region’s interest to the president.

“The victory is for all Ashantis and not me as an individual… While with the council, I would focus my energy on what I believe are our priorities in the Region. I will continue to push the government’s agenda on agriculture such as planting for food and jobs and planting for exports to enhance the livelihood of people in the Ashanti region”, Nana Brempong said.

“As far as I am concerned, we will work tirelessly to protect the good name of our Great Kingdom and improve the development of this Region”, he added.

Some 86 delegates drawn from the various 43 Metropolitan Municipal and District Assemblies formed the electoral college.

The election held at the Ashanti Regional Coordinating Council, was a nearly marred by chaos as some agents were in a heated disagreement after some delegates were seen taking photographs at the ballot screens.

The police were later called in to restore calm.

About Council of State

The Council of State consists of one representative from each region of Ghana, elected in accordance with regulations made by the EC under article 51 of Ghana’s constitution, by an electoral college comprising two representatives from each of the districts in the region, nominated by the District Assemblies in the region, and eleven other members appointed by the President.

President Akufo-Addo earlier this week announced the names of his 11 nominees to serve in the Council accordance with Article 89 (2)(d) of the constitution. Notable among the appointees are the former Metropolitan Chief Executive of the Accra Metropolitan Assembly, Stanley Nii Adjiri Blankson and a former President of the Ghana Bar Association, Sam Okudzeto, among others.