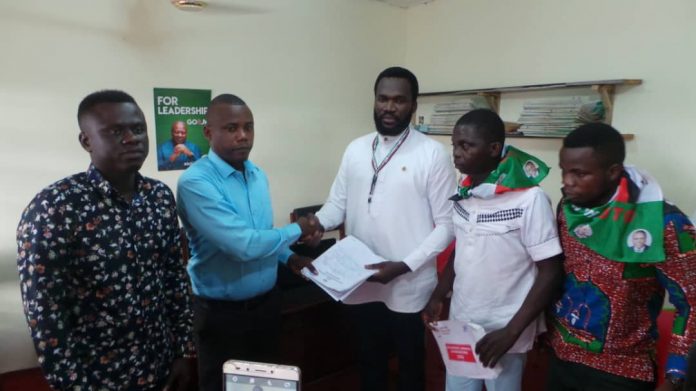 Philanthropist and leadership and management consultant, Dr. Donald Senanu Agumenu, has joined the race for the Akatsi North constituency primaries of the National Democratic Congress.

The President and Founder of Water for Rural Africa was accompanied by his supporters to file his forms at the Akatsi North constituency office of the NDC on Friday.

Speaking after submitting his bid, Dr. Agumenu, who is also an aide to former President Jerry John Rawlings, said he had chosen to contest the primaries and represent his people in Parliament because of his core vision to utilise his leadership skills in inspiring and empowering grassroots participation, to consolidate the gains of the reorganisation process of the NDC.

Dr. Agumenu said when elected he will ensure that the core values and principles of the party are fully maximised to shape and direct the mobilization and harnessing of potential business opportunities and human capital in the constituency that will improve the livelihood of the people.

The Akatsi North Parliamentary aspirant said top on his agenda was the creation of Small and Medium scale enterprises as well as agribusiness opportunities for his constituents through value addition in the agribusiness value chain since Akatsi North is noted as a food basket within the southern belt of the region with over 95% of the constituents directly involved in subsistent farming. He promised rolling out export market driven enterprises in the area to create jobs, stating that his focus was to revolutionise and modernize the farming and marketing methods in his constituency.

Dr. Agumenu noted that part of his drive is to support women and youth in his constituency to build their capacity in whatever field of endeavor to enable them maximise benefits from their businesses and professions. He further stated that the Ave-Have border-post is a strategic business gateway and every effort would be put in place to revitalize business activities through that entry point.

On the party structure in Akatsi North, Dr. Agumenu asserted that the branches are the pivot of the party, stating that he will institute positive effort towards strengthening the branches and ensuring their welfare as that guarantees the health status of the party.

“Our vision as a party for election 2020 can only be achieved through effective and efficient branches. Well-resourced branches is a well-nourished party,” he said.

Danbort 0-2 Hearts: Phobians match on to FA Cup next stage