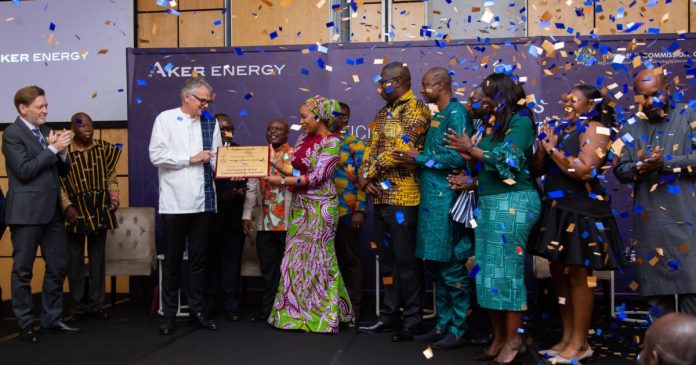 Aker Energy Ghana, a major operator of the Deepwater Tano Cape Three Point (DWT/CTP) Block, offshore of the Western region has targeted boosting the educational needs of Ghanaians through its social investment initiatives.

The focus is in line with the company’s Corporate Social Responsibility (CSR) module aimed at addressing some pressing social intervention issues faced by communities within its operational jurisdiction.

Despite some existing oil and gas companies operating along the coastal belt of the Western Region are already involved in similar Corporate Social Responsibility (CSR) projects, Aker Energy brings to bear new and more enhanced CRS modules meant to add value to the existing initiatives its partners especially the GNPC foundation and LUKOIL which are benefiting the citizenry who are in dire need of the services directed at the needy and vulnerable in the society and the nation at large.

Aker Energy, apart from its numerous CSR projects in its short period of operations in Ghana after taken over from HESS Petroleum between 2017/2018 has worked hard to improve upon the good legacy left behind by its predecessor in terms regarding the educational sector.

The company as part of its commitment towards the educational sector recently donated an amount $4.5 million to aide in building the human resource base in the oil and gas sector to the Government of Ghana through the Petroleum Commission.

The package is meant to help build the capacities of young Ghanaians to equip and enhance their skills in the oil and gas sector.

The Accelerated Oil and Gas Capacity-building (AOGC) Programme, which is an initiative by the Government of Ghana was mainly designed and directed at enhancing the capacities and expertise of indigenous Ghanaians in the oil and gas sector.

The Programme will run for five years and will seek to train individuals in various technical and vocational areas and also build the capacity of educational institutions to be able to train students and award internationally recognized training certificates.

According to Aker Energy, the donation towards the AOGC Programme, will serve as the benchmark for more youth to be engaged in learning and enhancing their skills in the oil and gas sector, thus bridging the gap of indigenous Ghanaians who have been relegated over the years in terms of the sector.

It could be recalled that the Government of Ghana through the Acting Chief Executive Officer of the Petroleum Commission, Mr. Egbert Faibille Jnr in his remarks lauded Aker Energy for its foresight towards investing in the education of Ghanaians.

He added that the package will help to provide business and management training for Small and Medium Enterprises (SMEs) and ensure the continuous professional development of employees of various public institutions connected to the oil and gas industry.

The company has further assured the people of Ghana that it will continue support key industry players especially the Petroleum Commission to certify vocational and technical experts of the youth desiring to work in the oil and gas industry by preparing them for jobs in the industry.

Aker Energy’s Country Manager, Mr. Jan Helge Skogen disclosed in a recently held stakeholders meeting for key players and regulators in the oil and gas industry in Accra.that “under the AOGC, we will seek support from and utilize Ghanaian educational institutions to increase competency levels through training of local trainers’ programme,”

Aker Energy, apart from supporting the government of Ghana has also contributed immensely in the educational sector thus supported to make educational life easier for brilliant but needy students along the six coastal Metropolitan Municipal and District Assemblies (MMDAs) of the western region with scholarship packages to further their education from the Basic Education Certificate Examination (BECE) finalists to the Senior High School level.

The scholarship dubbed Aker-GNPC Scholars programme, partnered with LUKOIL, Fueltrade and GNPC between the 2017/2018 academic years supported over eight hundred (800) underprivileged beneficiaries to continue their education at the secondary level.

Aker Energy, according to management through its partners is looking forward to improve the quota to benefit more underprivileged students for the 2019/2020 academic year intake.

The Aker-GNPC Scholars support programme is also expected to be extended to the tertiary level to enable beneficiary students pursue courses in technical and non-technical subject areas with some now capable of going through the AOGC programme to be offered University education in Scotland and Norway.

The company also sponsored as the Platinum or Headline of the 2019 Fourth annual Western Region Independence Day Inter-District JHS Quiz Competition among the eleven MMDAs in the region with Tarkwa Nsuaem emerging as the champions.

The Country Manager of Aker Energy, Jan Skogen further called on all stakeholders responsible for the sector to support the company to achieve its direction to adding up to the national quota

The oil company in recent times has announced that its oil exploration works in the Deepwater Cape Three Points block has been successful as it shows oil quantities estimated between 450 and 550 million barrels.

Ghana could be earning about 640 million dollars or (15%) in oil revenue within the next two years with the coming on board of Aker Energy’s new production wells.