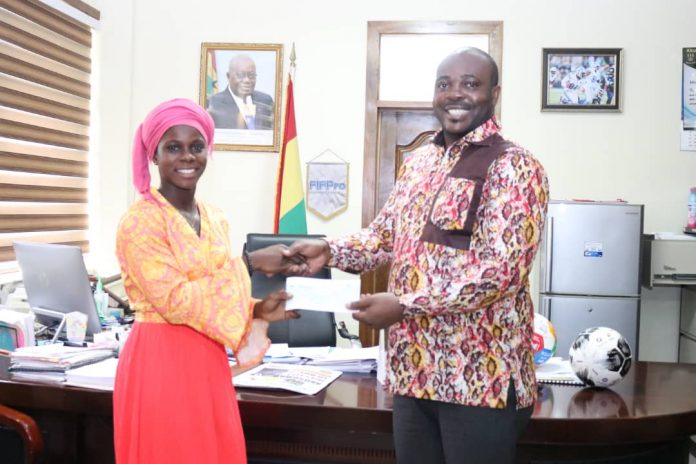 The President of Ghana, Nana Akufo-Addo, has rewarded Black Maidens forward Mukarama Abdulai with the sum of GH¢30,000 for her wonderful display in the 2018 FIFA U-17 Female World Cup in Uruguay.

The Minister for Youth and Sports, Isaac Kwame Asiamah, presented a cheque to the prolific attacker on behalf of the President in Accra on Thursday June 20, 2019.

The young promising, energetic and deadly striker for Northern Ladies won the golden boot award in the tournament with an impressive seven goals in four matches and also received the bronze ball award for her outstanding performance even though Ghana were eliminated in the knockout phase.

Mukarama’s brilliant performances did not go unnoticed as she received her first call-up to the Black Queens camp and played for the Queens during the entire Wafu Zone B Championship held in Ivory Coast which saw Nigeria’s Super Falcons becoming the second team to win the championship after Ghana won the inaugural Cup.