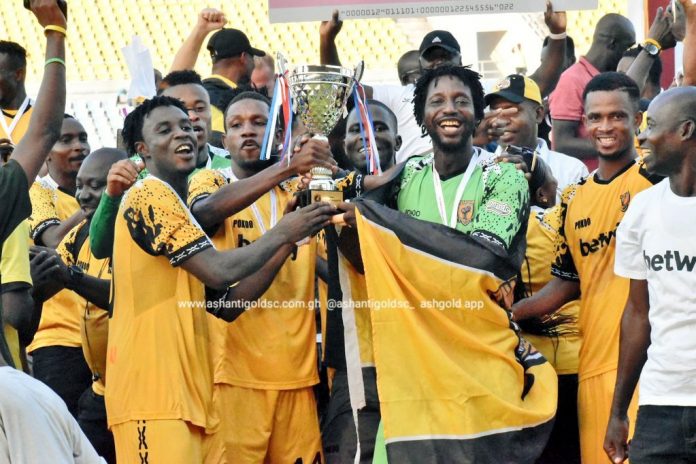 Ashantigold SC have beaten a division two side Still Hope FC in a friendly played Saturday, morning in Obuasi.

The miners engaged the division two side in a frantic friendly game at the Ofori Stadium where they train and wasted no time in making their intentions clear by taking an early lead through Emmanuel Osei Baffour on the 16th minute.

The Yellow and Black side ended the first half with just a goal after a dominant performance throughout the half.

Captain Amos Addai added to the tally on the 60th minute mark of the game to seal a hard fought victory for the miners.

Ashantigold Sporting Club Limited has been paired against Equatorial Guinean side Akonangui FC in the first round of preliminary stages of the upcoming CAF Confederation Cup.

The Obuasi-lads will represent Ghana in the competition for the first time since its inception in 2004 after winning the tier 2 of the NC Special Cup Competition at the Cape Coast Sports Stadium with a 1-0 victory over Nzema Kotoko.

‘Do you go to bed in makeup?’- David Dontoh slams Ghanaian...

CARTOON: Give the ‘boys’ jobs

Blakk Cedi hasn’t done anything for me as my agent –...