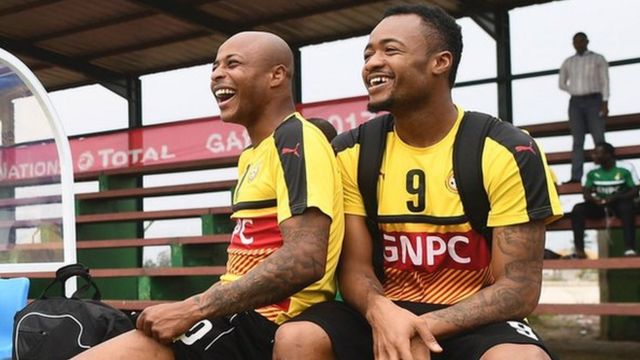 Al Sadd SC forward Andre Ayew has arrived at the camp of Black Stars as they begin camping today for the upcoming 2023 Africa Cup of Nations qualifiers.

The Ghanaian forward arrived with his younger brother Jordan Ayew as they link up with their colleagues in camp for the international break.

Ghana will play Madagascar on June 1st at the Cape Coast stadium in their first qualifier before traveling to aface the Central African Republic in the second match.

Ghana will also engage in a four teams tournament in Japan after the games in the qualifiers.

Jordan on the other hand played a part in both matches as Ghana booked their place in the next FIFA World Cup tournament in Qatar later this year.

Another player who missed the World Cup playoffs against the Super Eagles of Nigeria, Mubarak Wakaso has also arrived at the Black Stars camp for upcoming games.

Youngster, Felix Afena Ohene-Gyan is also in town for the matches together with Goalkeeper Lawrence Ati-Zigi and Baba Rahman.

FC Nantes youngster Osman Bukari has also arrived in the country ahead of the game against Madagascar and Central Africa Republic.

Akufo-Addo has delivered, give him four more years – Alan Kyerematen