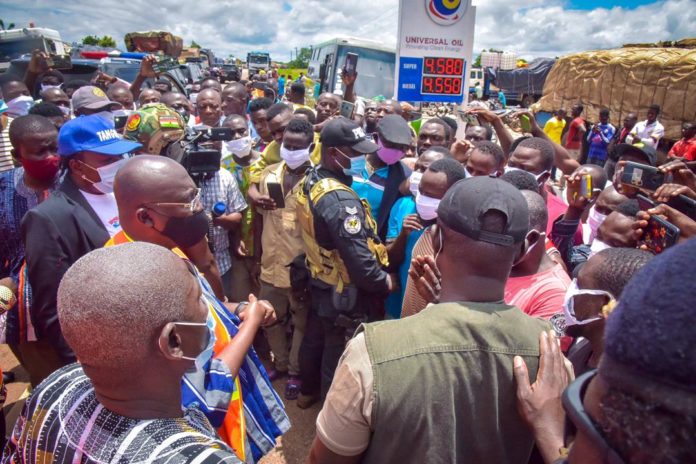 Vice President Dr Mahamudu Bawumia on Thursday assured drivers stranded on the Bolgatanga-Bawku Highway that government is working round the clock to ensure that the road becomes accessible for them.

The Kubore river in the Bawku West District of the Upper East Region has divided the road making it difficult for people and vehicular movement from both sides of the road leaving drivers and passengers stranded.

Dr Bawumia who visited the place on Thursday September 10, 2020 interacted with the cargo truck drivers who were stranded on either sides of the road and assured them of government’s plans to resolve the matter.

On the cause of the devastating floods, Dr Bawumia revealed that increased water volumes from the Bagre Dam and torrential rains are to blame:
“We have normally expected, historically, of a spillage not more than 8 million gallons per minute from the Bagre Dam. But this time, the spillage is 29 million gallons every minute. And that is much more and it is causing higher flooding. This has also been in combination with heavy torrential rains that we have experienced over the last few weeks here. And so the combination of the two – the rain and the spillage of the Bagre Dam – has caused the flooding. And that flooding has been devastating.”

Dr Bawumia noted that it was disheartening to have residents of cut off from the rest of the country due to the collapse of the Kubore bridge.
He therefore pledged to have the damaged bridge fixed as soon as practicable to enable both human and vehicular traffic cross the bridge even as NADMO continues to give relief items.

“NADMO has been very quickly reacting to the disaster that has befallen our people. And so here we are and NADMO has brought in relief items to provide for the people…”
“As we work to deal with this disaster, we want to assure people that we are solving it fundamentally with the Pwalugu Dam project. And we ask for their patience as we undertake this project and see to its completion. So I would like to on behalf of government, come and sympathise with the people who have been affected and to provide these relief items on behalf of NADMO and government to you,” he stated.

Pre-order the new Huawei Nova 7i in Ghana and enjoy free...