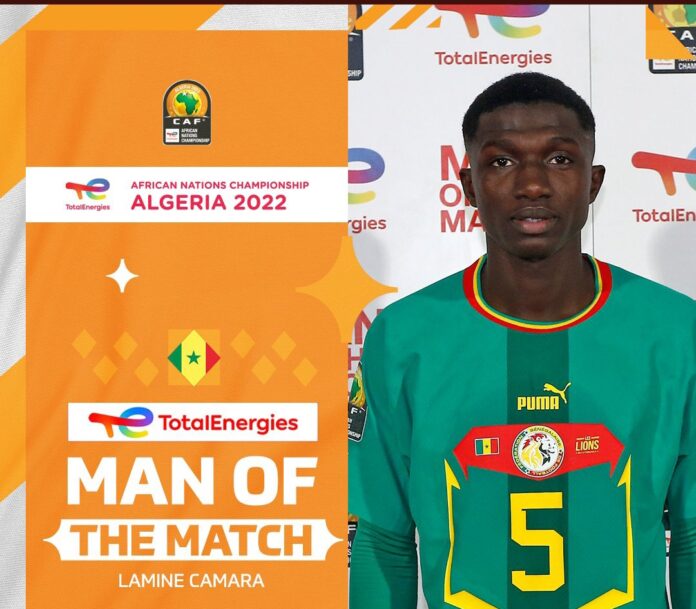 Highly gifted Senegalese defender Lamine Camara was given the Man-Of-The-Match award after a stellar performance in CHAN 2022 opener against Ivory Coast.

He played the entire duration of the match for the Teranga Lions and was a pivot for his team as they narrowly beat their west African Brothers.

The Lions of Teranga from Senegal beat the Elephants of Côté d’Ivoire in their opening game of the 2022 CHAN tournament ongoing in Algeria.

On Saturday evening, the Green and Yellows outfit saw off the Oranges with a narrow 1-0 win in the opening game to go top of Group B.

Senegal warmed themselves into the game but couldn’t really create good openings despite having greater share of possession heading to the last 15 minutes of the first half.

The second half of the match become a Ding Dong affair with both teams threatening to score the first goal on several occasions.

Senegal struck the post as well as their opponents in the second half of the match with half chances.

Senegal were awarded a spot kick but they failed to convert before Moussa Ndiaye reacted first to a loose ball in the box following a free-kick to score the only goal of the match to make it Senegal 1 – 0 Ivory Coast at the end.

After the first game between Congo DR vs Uganda ended in a goalless, Senegal takes top spot after the win.