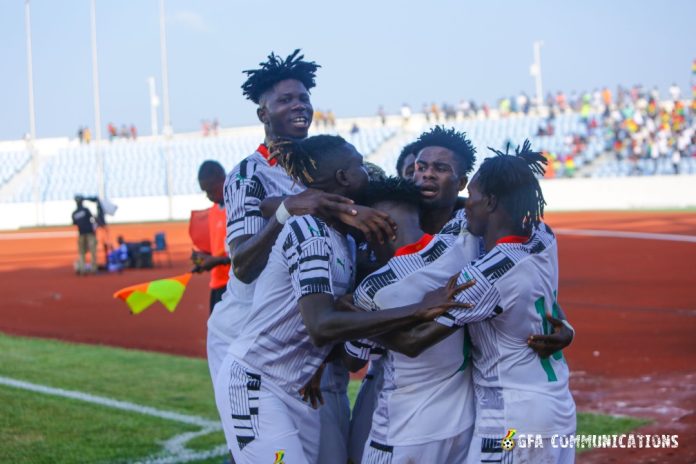 Ghana’s Black Galaxies beat the Squirrels of Benin at the Cape Coast stadium on Sunday afternoon in their first CHAN qualifier.

The Ghanaians started the game very well and showed their intensions very early in the with some quality football on display against the Beninese.

Ghana were awarded a spot kick on the 26 minute which was perfectly converted by Accra Hearts of Oak SC star player Daniel Afriyie Barnieh to make it 1-0 to the home team.

Ghana got a second goal few minutes to the end of the first half through Legon Cities FC player Jonah Atuqueye but the goal was surprisingly chalked off by the officials.

Early in the second half of the match, another Accra Hearts of Oak SC player Mohammed Alhassan headed in to make it 2-0 to Ghana as it counted tightly this time around to ease the pressure on the team.

Ghana dominated the game and could’ve scored more goals in second half with Tema Youth’s Evans Wusu, Barnieh and Attuquaye tormenting the away team defenders.

Substitute Omar Bashiru found Gladson Awako in the box with an extremely intelligent pass before the captain, Awako scored majestically to make it 3-0 to Ghana.

Afriyie Barnieh missed a golden opportunity to make it 4-0 and grab his brace after a brilliant team play later in the game.

Ghana won 3-0 and will travel to face Benin in the second leg in a week’s time as the winner of the tie comes up against Nigeria for a place in the next CHAN tournament in Algeria next year.