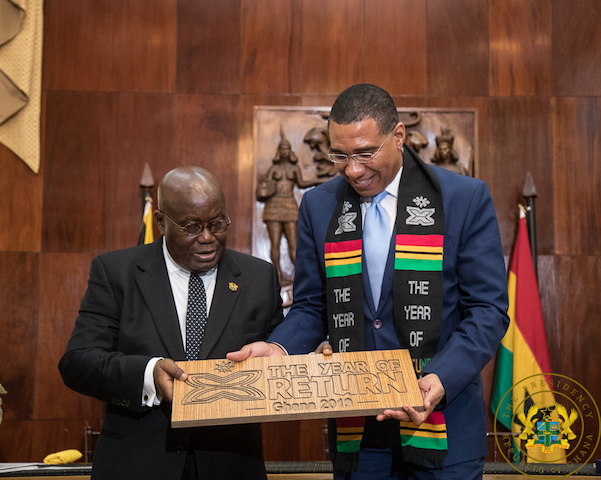 The 2020 version of the CIMG Awards is slated for June 16. I have gone through the criteria and I don’t see any product or scheme in 2019 which achieved as much market impact as the Year of Return initiative.

That initiative has achieved the status of a marketing phenomenon. Touristically, there has been nothing like it in all of our 60-plus years’ life as a nation, bettering the PANAFEST/Emancipation Day initiatives of Jerry Rawlings’ PNDC to second place.

Final figures with regard to arrivals and receipts are yet to come in from GTA, but here is one event whose financial impacts you do not need official records to believe. When was the last time you such swarms of diasporans in Ghana! At the height of it all, between September and December 2019, it looked as if every tenth person you saw in the streets of Accra, Cape Coast and Elmina was a diaspora African.

What food did they eat? My, I have lived in Ghana forever but at no time had I seen Ghanaian chop bars become THE rendezvous for such crowds of foreigners who could not, by any stretch of imagination, be described as “mobrowa”. Total strangers in our land were eating fufu and groundnut/palm soup laden with snails, crabs et al, and were doing so with relish. They came to also ‘Feel Ghana’. Craft shop owners at Arts Centre and other places turned into instant millionaires.

Their expenditure was estimated at US$2,589 per tourist. Multiply that by 200,000 tourists!

Not since Kwame Nkrumah had Ghana’s leadership role been so acknowledged and felt worldwide. Spiritually, coming to Ghana became as much a religious pilgrimage as Jerusalem and Mecca are to Christians and Muslims.

All of the above were possible because one Head of State of Ghana decided to make the initiative a deliberate official policy. For example, it took the nod of the President for visa-on-arrival fees to be slashed from US$150 to US$75 while reciprocal visa waiver agreements were entered into with Jamaica and Barbados.

In December 2018, the President personally played host to the Boris Kudjoe-led star-studded galaxy whose tweets went viral globally and brought in their kind.

I read elsewhere that the Advertising Value Equivalency (AVE) of earned media generated runs into US$3.5 million whilst the global media attention on Ghana via social media is valued at US$1.9 million.

All of above is why I recommend President Akufo Addo for consideration as CIMG Marketing Personality of the Year 2019.  I will go further. I propose that Mr Akwasi Agyeman, CEO of Ghana Tourism Authority, should be considered for the Marketing Man of the Year. The young man has fought a good fight, led a pro-active GTA team and executed the mandate.

Problem is: what happens after 2019? While the President’s ‘Beyond the Return’ drive is not a bad proposition, I beg to differ in the emphasis.

If you ask me, the most urgent task before us in tourism is how to get Ghanaians to travel within Ghana for leisure. Every government in Ghana’s 4th Republic promised and failed to deliver domestic tourism.

The latest domestic tourism numbers, showing a 26 per cent increase – from 500,000 in 2017 to 605,000 in 2018 – are not impressive, given the potential that exists. Though total expenditure by domestic tourists in 2015 amounted to GHc698.4 million, most of it was by Ghanaians who had traveled for funerals, not for leisure.

Research by a Ghanaian tourism professor points out that for most of the world’s top tourist destinations such as France UK, Spain and USA, domestic tourism accounts for between 60-80% of arrivals. The story is told of the UK. In the aftermath of the global financial crisis of 2008, international tourist arrivals in that country dropped by more than 3% to 14.8 million; however, this was offset by domestic tourist arrivals which rose by more than 11% to 11.3 million.

That is why it makes sense to me that the GTA is concentrating a large percentage of its earnings on the development of local attractions. For instance, there are plans to build one major highway rest stop each at Shama in the Western Region, Gomoa Assin in the Central Region and Fufulso in the Damongo-Mole area of the Northern Region.

I also endorse the Enclave Development strategy. We have just witnessed the take-off of the Mfantsiman Enclave. Also in the pipeline are the Saint Antonio Tourism Enclave for people in the Nzema-Ahanta area to develop the Victoria Park in Axim with the addition of restaurant, leisure facilities and boat rides; the Elmina Heritage Tourism Enclave and the Northern Development Enclave, including the Crocodile Pond.

Enter the World Bank. In 2018, the Bank approved US$40 million facility for Ghana. As if to support the finding by Ghana Statistical Services in 2015 that “Ghanaians do not travel for leisure”, the Bank’s facility sets aside US$ 15 million for developing infrastructure.

I have a prayer, that we would not come to the end of this project only to find that we have to return large portions of the money, unspent, to the Bank.

As we say in Ghana, “I have seen some before!”