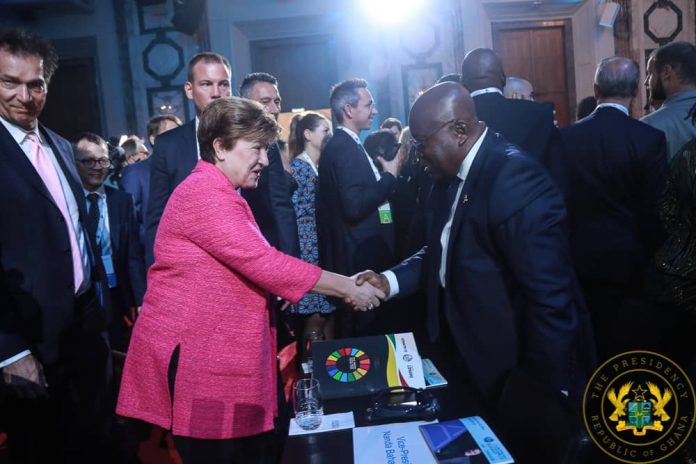 According to President Akufo-Addo, the Paris Agreement and SDG Goal No. 13, which demand urgent action to combat climate change and its impact, is providing the framework for Ghana to forge ahead in this direction.

Speaking at the R20 Austrian World Summit on Climate Change, on Tuesday, 28th May, 2019, the President revealed that, at the local level in Ghana, all local assemblies have been mandated to address climate change issues in their medium-term development plans.

That is why, since assuming office in January 2017, his Government decided to clamp down on the reprehensible activity of illegal mining that has been destroying the nations’ forests and water bodies.

He noted that a ban has also been imposed on the harvesting of rosewood timber as one of the measures to protect Ghana’s forests and endangered species. Again, through the “Youth in Afforestation” Programme, over 20,000 youth have been employed to plant 10 million trees across the country, as a way of increasing carbon sinks in the country.

Towards realizing Ghana’s international obligations under SDG 7, on access to affordable, reliable, and sustainable energy, as well as SDG 13, President Akufo-Addo reiterated Ghana’s commitment of promoting the deployment of renewable energy, in line with government’s policy target of 10% renewables in the energy mix from the current 1%.

To this end, in the course of this year, Jubilee House, the seat of the nation’s presidency, will be powered by solar energy, as an example to other public institutions. The target is to install 200 megawatts of distributed solar power by 2030 in both residential and non-residential facilities, and in state agencies.

President Akufo-Addo revealed further that he has engaged a select group of CEOs from the private sector to push forward Ghana’s “Green Agenda”, in the context of the Sustainable Development Goals.

The response, the President stressed, has been very positive, with commitments to create a Green Fund, to be financed largely by the private sector, in place.

This Fund, he added, would be used to drive the nation’s Agenda of ensuring access to affordable, reliable and sustainable energy for all in the country.

President Akufo-Addo stressed that “what we do in Ghana affects the people of Nepal, or Mozambique or Austria. That is why we need concerted Global action to tackle this menace. Success in addressing climate change will be one of the greatest legacies that our generation can give to the next.”

President Akufo-Addo, on the sidelines of the Summit, held bilateral discussions with the President of Hungary, His Excellency János Áder.

The Hungarian President expressed his appreciation to his Ghanaian counterpart for the invitation to pay an official visit to Ghana in January 2020, and reaffirmed his commitment to deepening the relations between Ghana and Hungary.

President János Áder urged strong collaboration between Ghana and Hungary in the areas of agriculture, water, forestry and energy, citing the considerable experience of Hungary in these sectors.

On his part, President Akufo-Addo thanked the Hungarian leader for re-opening the Embassy of Hungary in Accra, which, he explained, presents an opportunity to scale up the relations between the two countries.

He looked forward to the visit to Ghana by President János Áder, adding that considerable opportunities existed in Ghana for Hungarian businesses to take advantage of.

Describing Ghana as “a success story”, the World Bank CEO noted that, with $1.6 billion worth of investments in Ghana, the World Bank will continue to work with Ghana, and help develop the country’s capabilities in the areas of energy, human capital development, and the economy.

President Akufo-Addo, on his part, reiterated his Government’s determination to maintain fiscal discipline, manage the economy in a sustainable manner, and, ultimately, realise the vision of moving Ghana to a situation beyond aid.