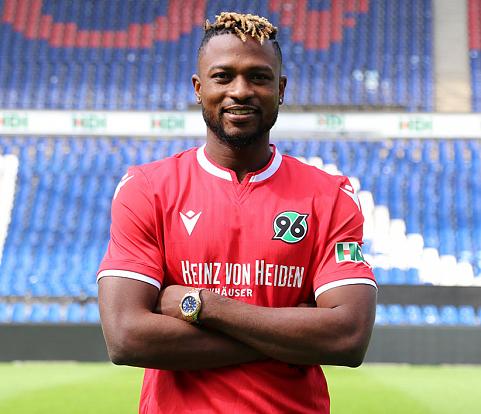 Ghanaian striker, Patrick Twumasi has penned a three-year deal with German Bundesliga 2 side Hannover 96 on Friday.

The former SC Astana hits man signed the deal after ending his loan deal with Turkish side Gazisehir Gaziantep.

The Ghanaian forward moved from his home club Red Bull and joined Latvian club FK Spartaks J Rmala, and in Russia for Amkar Perm in the Premjer League.

Twumasi shot to fame during his stay at Kazakhstan club FC Astana, where he won five championship titles.

The predator finisher scored 45 goals and 19 assists in 107 Premier League matches for the Kazakh team.

At Astana the 26-year-old forward also played in the Champions League (twice) and Europa League (14 times).

Twumasi played a total of 11 games for Deportivo Alaves in the 2018/19 season – mostly as a right winger.

Twumasi has two caps for the Ghana senior national team so far, and could be given more opportunity in the National Team should he deliver the goods for Hannover 96 this season.

Twumasi played 26 times for Turkish side Gazisehir Gaziantep on loan from Spanish side Deportivo Alaves CAD and found the back of the net six times in the Super Lig.

What just happened to the price of oil?