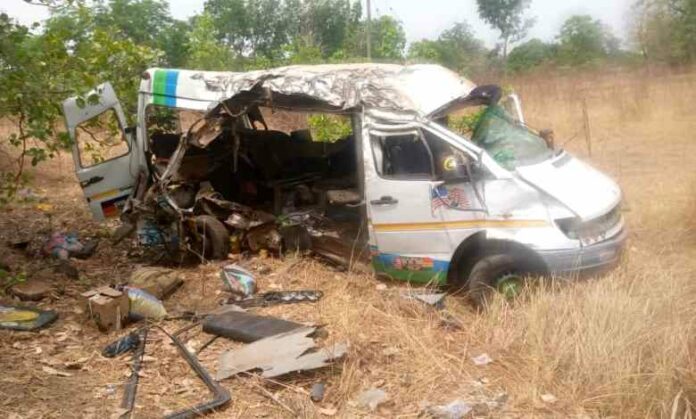 Six people including a four-year-old have died in a fatal accident on the Odweanoma mountains at Kwahu-Atibie in the Eastern Region.

Another victim is said to be in critical condition at the Atibie government hospital.

The accident which occurred on Tuesday afternoon involved a Hyundai truck with registration no. GW 5638-19.

The vehicle was said to have developed a break fault while descending the mountain from Atibie to Nkawkaw.

Eyewitnesses say the vehicle somersaulted several times on the road when the driver attempted to save it from running into a ditch.

The deceased include four men, a four-year-old boy and a female, JoyNews reported.

They were said to be travelling from a funeral of a relative of the NPP Eastern Regional Secretary, Jeff Konadu at Forifori in the Kwahu Affram Plains District which took place over the weekend.

Kwahu West PRO of the Ghana National Fire Service, Divisional officer grade three DO.3 Kwakye Addo said a fire rescue team managed to tow the vehicle from the middle of the road after receiving a distress call.

He said preliminary investigations show the driver could not successfully control the vehicle after the vehicle failed its breaks.

He advised drivers who are not familiar in terms of plying the Kwahu mountain to seek assistance to avoid such incidents.

Meanwhile, the bodies of the deceased have been deposited at the Atibie government hospital for preservation.

Construction of a national shrine not realistic – Numo Blafo III