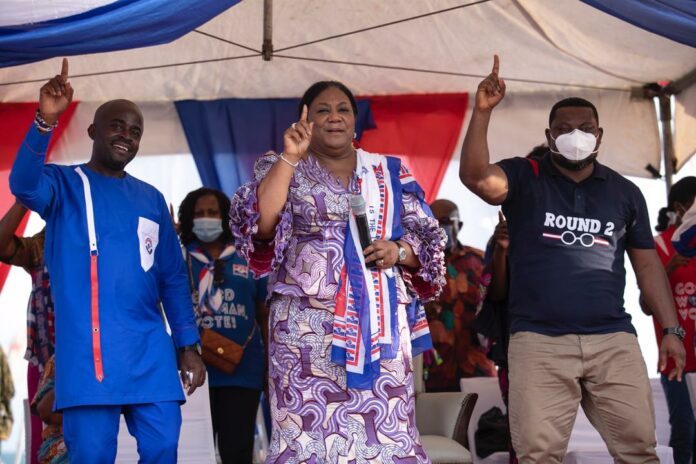 The First Lady, Rebecca Akufo-Addo, has urged residents of Ningo-Prampram to vote for a parliamentarian from the New Patriotic Party (NPP) to boost development projects in the constituency.

According to her, even though the people in the constituency have been voting for a parliamentarian from the National Democratic Congress (NDC) for the past 28 years, they cannot boast of equivalent development in their area.

She is therefore urging the people to vote against the current MP, Sam George, of the opposition NDC.

Mrs. Akufo-Addo said this when she toured and interacted with residents of Ningo-Prampram in the Greater Accra Region to canvass votes for President Akufo-Addo and the NPP in the up-coming 7 December general elections.

Mrs. Akufo-Addo told the gathering that though the NPP has never won the Ningo parliamentary seat since the inception of the Fourth Republic, significant projects executed in the constituency, happened under NPP governments.

She said under the government of President J.A Kufuor, the constituency was provided with a police station and police quarters with water supply extended from Sege to Prampram. Under the Akufo-Addo-led NPP administration, Mrs. Akufo-Addo said Ningo Prampram has benefitted from the 1 District 1 Factory (1D1F) initiative, which has seen three factories in the constituency, the construction of the largest greenhouse in West Africa, a new market, extended electricity and construction of storm drains.

“All these came to Ningo Prampram only when the NPP is in government and even though we have no NPP MP to bring your voice closer to government,” she said.

MP for Ablekuma North, Nana Akua Owusu Afriyie, who accompanied the First Lady on her tour told the residents to consider the many social intervention policies implemented by the party such as the NHIS under President Kufuor, Free SHS, 1D1F and the recent reduction and cancellation of electricity and water tariffs respectively under President Akufo-Addo, and vote for the party.