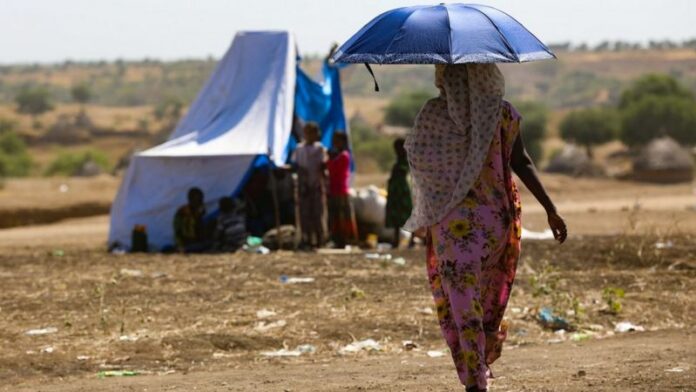 The Ethiopian government says local forces in the northern state of Tigray have fired rockets into a neighbouring region.

Tension between the government and the Tigray People’s Liberation Front (TPLF), which controls Tigray, boiled over into military clashes this month.

TPLF has not confirmed it, but has said “any airport used to attack Tigray” is a “legitimate target”, AFP reports.

In a tweet, the Ethiopian government’s emergency task-force said the rockets were fired towards the cities of Bahir Dar and Gondar, in Amhara state, late on Friday.

“The TPLF junta is utilising the last of the weaponry within its arsenals,” it wrote, adding that an investigation had been launched.

An official told Reuters news agency that one rocket hit the airport in Gondar and partially damaged it, while a second one fired simultaneously landed just outside of the airport in Bahir Dar.

Both airports are used by military and civilian aircraft.

The rocket attack has raised fears that fighting in Ethiopia’s northernmost state could spread to other parts of the country.

Prime Minister Abiy Ahmed ordered a military operation against the TPLF earlier this month after he accused them of attacking a military camp hosting federal troops – claims the TPLF deny. There have since been a number of clashes and air strikes in the region.

The conflict has forced thousands of civilians to cross the border into Sudan, which says it will shelter them in a refugee camp.

Hundreds of people are reported to have been killed in the conflict. Human rights group Amnesty International said it had confirmed that “scores, and likely hundreds, of people were stabbed or hacked to death” in Mai-Kadra (May Cadera), a town in the South West Zone of Tigray, on 9 November.

Getting independently verified information about the clashes is hard because phone lines and internet services are down.

Were there mass killings in Tigray?

Amnesty said evidence showed that “scores” of people were killed and wounded in knife and machete attacks in Mai-Kadra.

It said it had seen and “digitally verified gruesome photographs and videos of bodies strewn across the town or being carried away on stretchers”.

Amnesty said the victims appeared to be labourers not involved in the conflict. It is not clear where they came from.

Ethiopia’s human rights commission said it would send a team to investigate reports of mass killings.

Mr Abiy has accused forces loyal to Tigray’s leaders of the massacre, saying they went on the rampage after federal troops had “liberated” the western part of Tigray.

Some witnesses also said the attacks were carried out by forces loyal to the TPLF after they had been defeated by federal troops in an area called Lugdi.

However, Tigray leader Debretsion Gebremichael told AFP news agency that the accusations were “baseless”, and the Tigray government denied that its forces were behind the killings.

The UN human rights chief warned the killings could amount to war crimes.

Why are the Ethiopian government and TPLF fighting?

Tension has been mounting for some time as relations between the TPLF and the federal government have deteriorated.

The TPLF dominated Ethiopia’s military and political life for decades before Mr Abiy took office in 2018 and pushed through major reforms.

Last year, Mr Abiy dissolved the ruling coalition, made up of several ethnically-based regional parties, and merged them into a single, national party, the Prosperity Party, which the TPLF refused to join.

It also resents what it calls the prime minister’s “unprincipled” friendship with Eritrean President Isaias Afwerki.

Mr Abiy won the Nobel Peace Prize in 2019 for his efforts to bring peace with long-standing foe Eritrea.

For his part, the prime minister believes the TPLF officials are undermining his authority.

Mr Abiy ordered the military operation against the TPLF after he said its fighters had crossed “the last red line”.

He accused them of attacking a military camp hosting federal troops on 4 November, calling the action “treasonous”. The TPLF has denied attacking the camp.