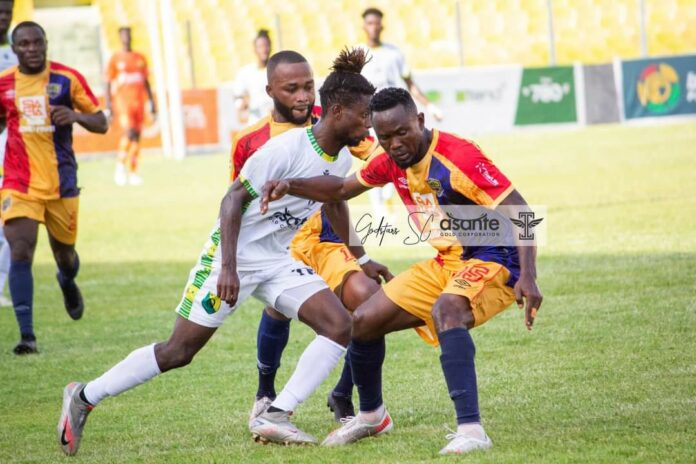 Hearts came back from behind to pick a valuable home victory of the 2022-23 Ghana Premier League season after four matches.

The Phobians started the game on a poor note, conceding in the 9th minute but managed to bounce back in the second half.

Kwabena Opoku Prince capitalized on bad defending from Hearts of Oak defenders and found the top right corner with a brilliant effort to beat out of place goalkeeper Richmond Ayi.

Hearts came into the second half as wounded lions firing from all cylinders in search of the equalizer against the determined Gold Stars players.

The visitors were reduced to 10 men on the hour mark when their goalkeeper Joseph Baah was sent off for hitting a Phobian player.

Hearts took full advantage of the situation and started putting pressure on the away team and started creating some decent chances.

Finally, Isaac Mensah found the back of the net from close range to give the home team the needed equalizer to restore parity and make it 1-1 on the 78th minute mark.

Three minutes from the final whistle, Gladson Awako scored a sumptuous free-kick to turn it around for the Rainbow Boys who grabbed their first win by hairsbreadth.

The win is the first for the Phobians since May this year against same opposition in the 2021-22 Ghana Premier League season.

Hearts now boast of one win two draws and one defeat in four matches in the season so far.

Duffour: Become an active member of NDC to redeem Ghana from...