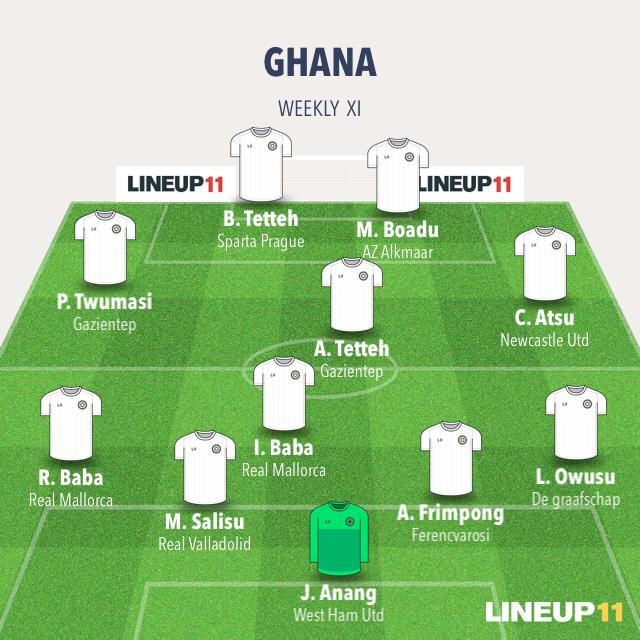 It was not a bad week in relations to the output of Ghanaian players abroad as there were a couple of goals whilst other players also excelled greatly.

Dailymailgh.com brings to you our official team of the week:

He was excellent with his marauding runs down the right flanks as De Graafschap came from two goals down 4o defeat Jong Ajax 3-2  on September 13.

The onloan player from Chelsea put up a great show in his La Liga debut for Real Mallorca in their goalless draw with Athletic Club de Bilbao. Baba made two fantastic clearance to prevent the visitors from scoring and was lively moving forward.

The ever improving youngster put up a solid performance for Valladolid in their 1-1 draw with Osasuna. Salisu made some vital interceptions to keep his team in the game.

He brought stability to the Ferencvarosi back four as they went away to wallop Paksi FC by four goals to nothing. The former Red Star Belgrade defender was the main act at the back for rhe Europa League campaigners.

It was a wonderful display at the middle of the pitch for the 23- year-old. Baba proved to be the engine of the Mallorca team against Bilbao and he drove them forward anytime he had the ball.

The Ghanaian winger provided his second EPL assists in two games as Newcastle lots 3-1 to Liverpool ag Anfield. Atsu set up Jetro Willem for the opener in the 7th minute and proved to be a tough customer for Alexander Trenr Arnold anytime he changed flanks.

The talented central midfielder was superb for Gazisehir Gaziantep in their 3-2 win over Besiktas. Aziz supported the attack and also served as the key dustributor of the balls.

The 18 -year-old striker was the man of the match at the  AFAS Stadium as he scored twice in AZ Alkmaar 5-1 win over Sparta Rotterdam. He tormented the Sparta defenders throughout the 77 minutes he lasted.

The 6 feet 4 inches striker had a great game against Fastav Zlin as his Sparta Praque side went away to win 2-0. The Ghanaian youth international opened the scoring for his club and proved his worth throughout the 63 minutes he played.

The Ghanaian striker was instrumental as Gaziantep saw off Besiktas by three goals to two. He opened the scoring for his side with a penalty and was always a threat on the left flank.