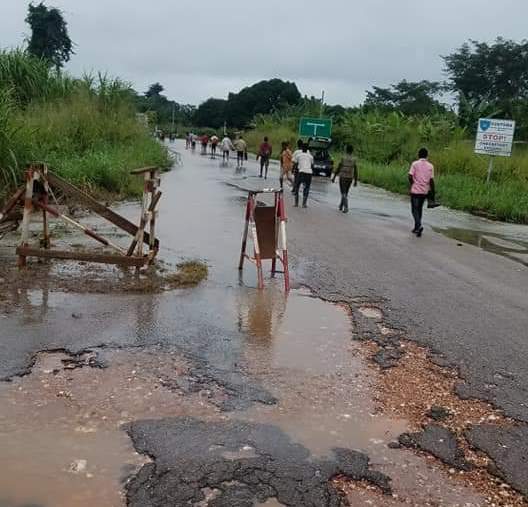 Rain-swollen rivers in parts of Ghana’s Bono Region submerged dozens of villages and stranded residents over the weekend.

In Tainso, a farming community near Wenchi, Customs and Immigration Officers fled for safety as the Nyimpene River bursts its banks— rendering roads linking Wenchi and other adjoining towns inaccessible.

“A makeshift structure used by the officers as kitchen was swept away by the floods. Cooking utensils and documents were not spared”, said ASI Ambrose Anyimah, the Deputy Immigration Commander in the Wenchi Municipality.

ASI Ambrose Anyimah said the situation is so dire that it could jeopardize the work of the service in that enclave. He is appealing to individuals and organizations to come to their aid.

Meanwhile, the situation is no different at Banda Boase, Biema and other adjoining communities— all in the Bono Region.

Several residents have been cut off from the Banda District of the Bono Region following torrential rains Friday.

Correspondent Nana Anfreh Damanta who visited the community reports that roads leading to the two communities have been rendered inaccessible after the Yoroweh River flooded the area.

Residents want government to reverse the situation or risks losing the 2020 polls.

“Our roads are destroyed, students are unable to go to school or take the sick to Nsoko hospital. Our MP, honourable Ahmed Ibrahim always uses this road yet he is not working to fix it,” a member of the community narrated.

Assemblyman for the area Baka Paul told DailymailGH that the situation is so dire that it affecting quality education and healthcare.

“I can say we are no longer part of Ghana because we don’t have an accessible road that takes us to Nsoko because of the heavy rainfall,” the Assemblyman told our correspondent.

Flooding is perennial in Northern and Southern Ghana where hundreds have died in the past years. It is often blamed on choked drainage due to improper disposal of waste.

Obuasi: One dead, nine others on admission after consuming ‘poisoned’ food...